8 minute read
This post is part of the series 'Sideband Adapters':

Back in January this year I received a couple of emails. The first one was from someone in the South of England asking my advice on how much he should sell his RA121 Sideband Adapter for. The second email was from a client of mine in San Diego informing me that he was in negotiations with a gentleman in the South of England regarding the sale of an RA121. My client in San Diego had previously purchaced a fully refurbished RA117 from me back in 2016 and now he wanted to know if I would give the RA121 the same 'treatment' should he be successful. To cut to the end of the story, he was successful and the RA121 was shipped up to me for a full refurbishment. Like his RA117, he specifically asked that I replace ALL the Silvered Mica capacitors as well as any old paper ones. This was going to be an interesting project since my only contact to date with an RA121 was photographs of Brian Goldsmith's example.


There are as far as I can ascertain, three variants of the RA121 ... A, B and D. The RA121A was manufactured for the British market and the model 'B' was for the North American market. The RA121B differs thus ...
The mains cord is hard-wired (no chassis connector) and there is no mains voltage selector panel. The 100KHz input connector is an SO-239 and it is possible that the RA121B may have had a chassis mounted sideband-reversal switch fitted as standard so that it could be used with the RA117 or any of the RA17 series.
The RA121D has an ovenised crystal controlled 118KHz oscillator. There is also a curious buffer stage on the output of the 18KHz amplifier stage. It is likely that the model 'D' was only made for the British market, and as such, the mains cord connects using the standard Plessey connector and there is a mains voltage selector panel. The 100KHz input is via a Brurndept connector, although the one refered to in this article sported an SO-239, which I think was a recent modification. 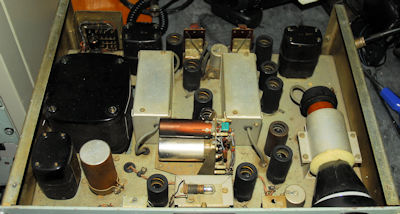 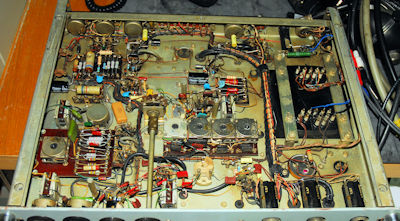 When it arrived (very well packed), the first thing that I noticed was that the serial plate identified it as an RA121A, although it definitely had all the right 'bits' for an RA121D which was probably why the original owner had described it originally as a 'D'. Being a steel chassis, it was beginning to show its age, although the underside looked a lot better than the top-side. As can bee seen from the above photographs, the layout is fairly standard of Racal Sideband Adapters. Interestingly, as with the RA63, all the B7G valve bases carry B9A-size cans ... with the exception of one. Note the B7G-can just above the bronze-coloured horizontal can in the centre. This is the afore mentioned additional buffer stage.

Now that I had it in my possession I set about putting together a shopping-list of parts for the refurbishment. I calculated that a total of eighty-seven silvered mica capacitors would need to be replaced! This could potentially be expensive but shopping around, I managed to keep the cost down to something reasonable. Pouring over the schematic and the Items List in the RA121 manual it looks like Racal often used silvered mica capacitors where ceramic capacitors would have been adequate. Also, I found that there were three 'massive' 22nF silvered mica capacitors in the RA121. I had no idea that such large value silvered mica capacitors existed ... and would I be able to get some? The answer was an unexpected yes. I found that RS Components sell them at a cool £50 each! I also found that they also do a 33nF silvered Mica capacitor for only £37! But I needed three 22nF capacitors, and at £150 for the three, that would more than double the cost of the Silvered Micas alone. Checking the schematic, these were all in the 18KHz stages where temperature stability was important so I hunted around for a suitable alternative and sourced some high-spec. polystyrene capacitors at something close to one-hundredth of the price!

I should also point out that to date, I have NOT been able to source a schematic relating to the RA121D, and any references to the RA121D simply make mention of the crystal-controlled 118KHz oscillator but make no mention of the curious buffer stage between the 18KHz Carrier Amplifier and the 18KHz Carrier Re-insertion Oscillator ... both of which I had to 'reverse-engineer'. 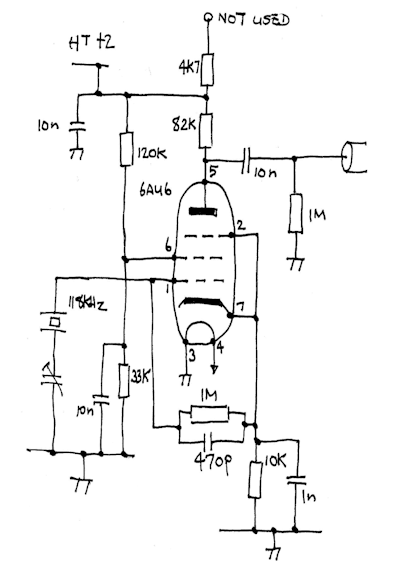 118KHz ovenised crystal oscillator. The oven is powered from the heater supply. 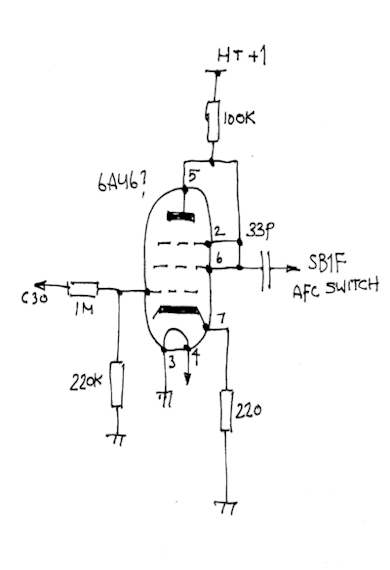 
The crystal oscillator employs the same oven as used in the RA63D. However as with the RA121D, I have yet to see a schematic for the RA63D. A bit of a theme going on here? However, the circuit in the RA121 is very similar to the crystal oscillator used for the 118KHz oscillator in the RA218 with a few minor component value changes. What I perceive as a buffer stage is very odd indeed ... configuring the pentode as a tetrode ... never seen that before. I believe it is a 6AU6 ... the markings were rubbed off the glass envelope. It checked out perfect as a 6AU6 on my VCM-163.

All was going well. All the silvered mica capacitors were replaced. Any carbon resitors which had not already been replaced were subsequently replaced, as were all the paper capacitors. I then moved on to re-stuffing all the chassis-mounted smoothing capacitors. I encountered a dodgy wire between the 6X4 rectifier and the HT fuse. I removed the valve, cleaned the socket and replaced the wire. On powering up I was met with smoke from 6X4 valve base. I'm not entirely sure what happened but it appears that cleaning the base resulted in the insulating material carbonising and we had 'tracking'. The only option was to replace the valve base. I didn't have any B9A-size B7G sockets so I had to be creative. 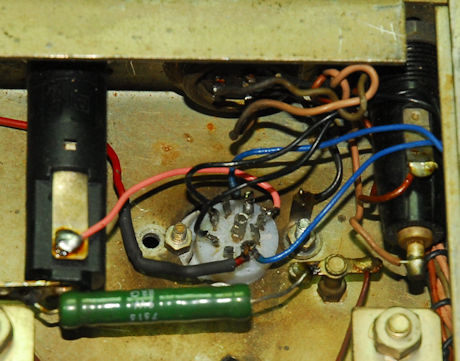 But we were still in for some more excitement. The valve base had stopped spitting sparks and smoke but there was no HT. It was then that I noticed that the gettering on the rectifier was going pale and that there was a bright red spot in the centre of one of the Anode plates. See the photograph above left. I'm going to speculate that the carbon tracking within the socket somehow over-stressed one of the diodes (one half of the 6X4) resulting in extreme heat. This in turn super-heated the glass adjacent to the anode-plate to the point that it actually melted. The vacuum within the envelope then caused the now soft glass to be pulled in towards the source of the heat to the extent that it created a hole ... and hence the white gettering. I replaced the valve, actually an EZ90, with a 6X4 and all was again well with the RA121. 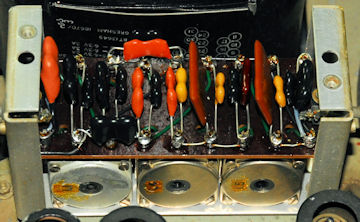 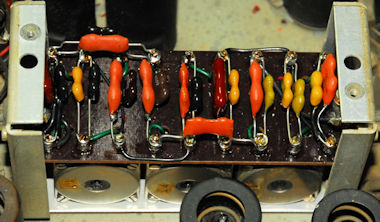 
Re-aligning the filters was easier than expected, it being just a case of following the procedure in the manual. 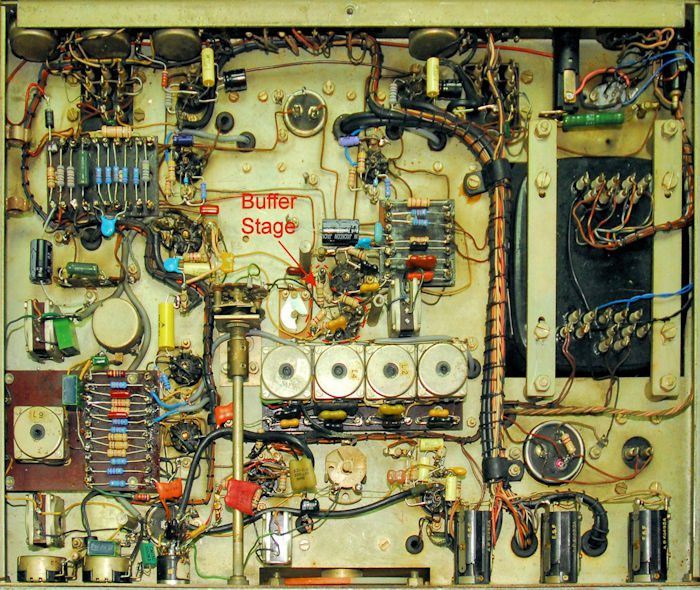 The underside of the refurbished RA121D with the location of the buffer stage marked.

I finished off the reurbishment by fitting a brand-new reproduction Racal badge to the front panel and shipped it off to San Diego. The performance is impeccable. The little CRT is nothing more than a tuning aid. The best way to verify alignment is to tune in to an AM broadcast station and monitor the audio on the receiver. Then switch to the RA121 with the LO offset set to zero and AFC OFF, adjust the Fine Tune control for the best circular lissajous on the CRT. Then set the LO offset to + or - and monitor each of the resolved sidebands on headphones. Which one corresponds to which LO offset will depend on whether you are using an RA17 or an RA117. If everything is adjusted properly there should be little or no difference between the two audio streams.
ISB Adapter
« previous
next »