Yet another shack revision! 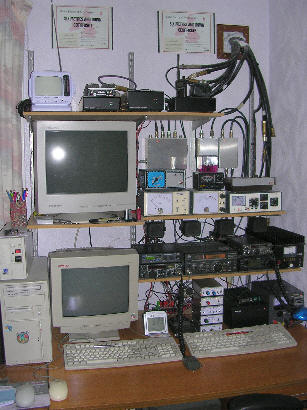 
It has to be said that 2004 has been an exceptionally quiet year as far as radio has been concerned ... for me anyway. However, 2004 did see my DXCC QSL count reach 260 confirmed out of 260 worked, thanks to the 3B9C operation. Then in august, I almost had my second DX contact on 13cm. OZ and SM beacons were ‘bombing’ in. But just as I was about to initiate a contact with an OZ station, almost simultaneously, my IC260 developed a TX fault and my ‘broadband’ Internet connection collapsed (a failed British Telecom router somewhere down the line apparently!). Consequentially, I was unable to post on the DX cluster that I had a problem . . . A real anti-climax and very frustrating!

As can be seen in the photograph, the operating position has undergone further changes. The most noticeable of these being the acquisition of two more miniature loudspeakers, enabling me to connect one to each of the four transceivers. And my ‘stack’ of little home-brew boxes has now grown to five, with a long over-due improvement to my transverter control box.

Then there were five!
The middle box on the right is not so much a new addition . . . more a revamping of a much larger and considerably less aesthetically pleasing box which had served as my transverter controller for many years. As well as being bulky, the original controller had one serious failing, in that it automatically routed the PTT from the IC260 to anything that was connected to it at the time. Thus, if all three transverters and the 2m PA were switched on, all four boxes would switch to transmit simultaneously when the PTT was pressed. This was NOT an ideal situation. Like it’s predecessor, the new controller provides the switched DC (13.8V) and PTT for my three transverters. However the routing of the PTT is logically determined by the selected 144MHz RF path by way of the red knob on the box above. This enables all the transverters to be on and temperature stabilized. As well as also routing the PTT to my 144MHz PA like the 144MHz ‘router’, the new control box also carries expansion capability for a further two devices.

There have been changes to the computers in the shack also. The old DX4-100 that was running BMKMULTY has now been pensioned off, to be replaced with the 333MHz Cyrix based machine that was previously running SHACKLOG. There were several reasons for this re-shuffle. Chief of these being that the DX4-100 did not have enough memory or hard disk space in order to run anything better than Windows 3.1. Consequentially, it was very complicated to integrate with the LAN. Also, several years ago, DELL in their infinite wisdom decided to manufacture P4 machines using RIMM memory for system RAM. This ultimately was NOT a good decision, nor was it a good choice when a friend of mine bought one of these machines with a ‘piddly’ 128MB of RAM. Especially when earlier this year, he discovered that he could actually buy a higher spec PC for less than the cost of upgrading the DELL to 512MB! So, to cut a long story short, I was fortunate to inherit the DELL and now have a 1.3GHz P4 box running SHACKLOG . . . . Which may seem a tad excessive, but with its 30GB hard disk, it also doubles as my archive store for all my radio data. The main ‘work-horse’ in the shack/study is still a 1GHz P3 box which is no longer viable as far as upgrades are concerned, however, what it does, it does very well, and so will remain in use for the foreseeable future. Also on the LAN, but downstairs, the kids’ machine has been elevated to a 550MHz P3. I also have a 3GHz P4 Notebook, primarily for business, which interfaces with the LAN via wireless and my daughter now has my old 70MHz Pentium Notebook for typing up homework. Recently she asked if I could put it onto the LAN so that she could browse the Internet in her bedroom . . . To which I replied, ‘no’.
DXCC
« previous
next »