2003 seemed as good a time as any to carry out routine antenna maintenance. The CobWebb for one, accumulates vast quantities of green lichen on the fibre-glass spreaders. I had also become aware that the Fly-Trap inverted-V was behaving oddly on 40m. Investigation showed that the southern leg of the antenna had stretched at least 9 inches!! I therefore decided to ‘re-wire’ the entire antenna with professional grade wire salvaged from a Racal wide-band antenna. This task took several hours but was completed by early afternoon on Saturday 28th June and the mast was wound back up into the vertical position. The anti-tilt catch was engaged and the bottom anti-telescope catch was released. I then wound the mast up to its full height and ensured that the top safety catch was free. I have a piece of tape on the winch cable which lets me know when the mast is fully up. I pulled on the handle to lift the bottom of the inner section just clear of the safety catch, when ... 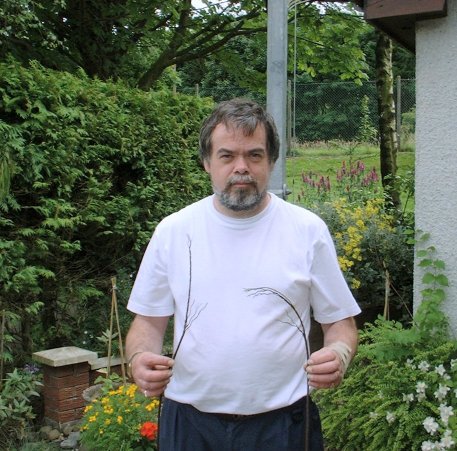 Oops!... The snapped winch cable
... there was an ominous TWANG! and the winch handle became uncharacteristically loose! I knew what had happened, and instinctively stepped away from the base of the mast. Less that half a second later the bottom of the inner section met the end stop with an almighty CLAAANG! The CobWebb had disintegrated with all the finesse of an umbrella in a hurricane! My initial reaction was to look at the resulting carnage and think to myself, “that’s impressive, I always wondered what would happen if the cable snapped”. The CobWebb was not the only casualty. The 8-ele. 2m yagi had taken on a slight bend at the centre, but higher up, the boom on the Mini-Beam had literally snapped in two! The ‘diamond’ at the back looked like it was about to come down at any moment. “But how do we get it down?” I quickly attached the winch cable by way of guy wire ‘D clamps’ to one of the padlock rings near the base of the mast and succeeded in tilting it over. Once down, everything was stripped off the mast, which was itself then dismantled. The force of the drop had almost knocked the end stop out of the bottom section and the mounting plate in the rotator cage had buckled. Both were quickly fixed with a few carefully aimed blows from a ‘mash hammer’. Damage to the Mini-Beam was limited to a snapped boom and dipole centre insulator, both of which were quickly repaired.


On examining the CobWebb, I found that the only damage had been the shattering of the four sleeves which connected the spreaders to the central cross and the 2m 8-element beam had bent slightly at the point where the boom sections joined. I ordered a replacement cable for the mast and located suitable ‘grp’ tubing to make new sleeves for the CobWebb. By the Wednesday, everything was back in place on the mast, with the exception of the 70cm collinear and the 2m beam, both of which had not been used for several years. Although I have left their respective coaxes in place. All coax runs at this QTH are ‘Hard Line’ and removing them would have been troublesome. The thought then struck me; had the top safety catch engaged, I would have required a crane to lower the mast! ... and had the cable snapped with the mast tilted over, the result could very easily have been catastrophic!


The cable had snapped about 4 feet down from the top pulley, on the outside, and was due simply to 7 years of corrosion. I had on occasion, greased the cable, but always with the mast down. Consequently, this resulted in approximately 15 feet of cable inside the telescoped mast which was out of reach. With the mast up, this un-greased section was prone to corrosion and I can only assume that a chain reaction ensued after a ‘critical’ number of strands had failed. The new cable was greased over its entire length and the mast will in future be dismantled periodically in order to re-grease it and check for damage. I have also made the decision to replace the cable after 5 years.