Pye Bantam: Another 2m AM rig from the 70s
My friend and I continued to experiment with building things, usually made from parts culled from the discarded black and white television sets. Sometimes the things we made worked! We used to take it in turn to go to each other’s house. Then one evening, my friend informed me that he wasn’t coming round since he had enrolled in a class for the Radio Amateur’s Exam. ‘Thanks for telling me John!‘ I have to admit that I was a bit ‘miffed’ at first. I enquired at the college regards getting on the course, but I was a week late and besides I had missed a sizeable part of the course. My friend passed the course that winter and was good enough to lend me the RSGB publication ‘How to pass the RAE’. I read it from cover to cover, answered all the questions, signed up for the next exam and passed the following Easter. In those days it was a 3 hour written exam, not the multiple choice nonsense we have today. Although I suppose the present format makes it easier to mark, but it doesn’t encourage newcomers to understand in real depth just how a radio works. In those days it took a long time for licences to come through and it wasn’t until August that year (1976) that I received the Call GM8LWR ... What a mouthful! I even forgot it the first time I called CQ! I remember vividly my first QSO. Sweaty hands, dry mouth ... but the elation afterwards! I still have my first transceiver ... a modified ex-police Pye Cambridge, of the portable variety. This is a 6-channel AM box, and initially I had one set of crystals installed for 145.8MHz. In 1976, there was quite a large fraternity on ‘point 8‘ ... mostly mobiles, but everybody had a rig at home too and it soon became necessary to come up with an over-flow frequency (we didn’t like the term channel). So we came up with 145.8375MHz. This was chosen so that those using the newly available 25KHz spaced FM black boxes would not be able to listen in ... Hmmm?


Back in 1976 when I was first licenced as GM8LWR my only antenna was a half-wave vertical dipole for 2m which was originally manufactured for Her Majesty’s Forces (so the advert said) and originally worked on 139MHz. This was joined shortly by a home-made horizontal dipole, again for 2m and I could switch between the two at mast level. The horizontal dipole was soon replaced with a rotatable 4 over 4 for 2m. By 1979 I had invested in an IC260 and a 70cm transverter. The 4 over 4 was duly replaced with a 6 element quad while an 18 element parabeam was (until recently) used on 70cm. Then in 1980, I bought a 23cm transverter. This only developed 500mW so I built a small linear amplifier which gave me about 7W into a 15 over 15 slot-fed yagi (a D15). All antennas were on top of a 22 foot scaffold pole and turned by an AR40 rotator. 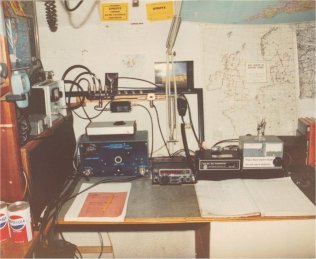 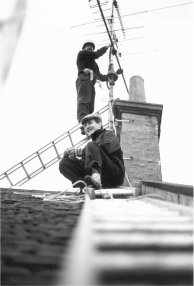 Antenna work, 1988
In 1983 I bought my own house and all my gear was duly dismantled. It wasn’t until 1988 when I got married that my XYL prompted me to get back on the air. Getting the antennas up was to be a 13 hour marathon involving no less than 3 ladders at any one time. The house was an upper-villa flat with no access to the roof from inside. One ladder was required to reach the roof, then a second with roof-extensions was pushed up and hooked over the apex and a third went between the apex and the chimney-stack to give access above the rotator.


In order to run the coax to the array, the roof-ladder had to be hauled up over the apex and installed on the other side of the roof. I then had to climb down the ladder in it’s new position and hang out over the side of the roof to feed the coaxes in through a convenient hole which had originally carried mains electricity for the block of houses. Then in order to get off the roof, I had to haul the roof-ladder back up and position it in it’s original position. Because of space constraints, I limited myself to HB9Cvs on 2m and 6m whilst retaining the 18 element on 70cm and the D15 on 23cm. This major undertaking was repeated twice. Not long after the array was erected, strong winds all but destroyed the 6m beam, then in 1990 it was all taken down when we moved to another house.


Unfortunately I don’t have any photographs (that I can find) of my aerials between 1990 and 1995. Our cottage had two chimney-stacks. Ultimately one stack supported my 6 element quad for 2m and 3 element beams for 6m and 4m as well as my HF doublet for 160m through to 30m. The other stack supported my Cobwebb for 20m through to 10m as well as my 18 element parabeam, the D15 for 23cm and a home-made 20 over 20 for 13cm, made from copper pipe and brazing rod. Until 2006, my only QSO on 13cm was a staggering 704Km with LA/DB1DI/P for which I received the RSGB’s ‘Six Metres And Down Certificate’ number 21 for that band. Not bad for 250mW! Again we had no access to the roof from inside the house so access was via ladders ... two this time. However, there was another problem in that there was no easy route for the coaxes into the house. This was eventually achieved by removing a roof slate, cutting a hole in the roof and fitting a zinc sheet with a rubber gland, through which a plastic drain-pipe with a right-angled bend was pushed. This arrangement worked very well and it enabled me to keep my coaxes as short as possible.


In the summer of 1993, whilst repairing a receiver for a friend, I stumbled across a group learning morse-code on 2m. To cut a long story short, I joined this group of prospective 'Class-As' and by November 93 I was watching television whilst copying morse at 15 w.p.m! Needless to say I passed the morse test and became GM0UHC.


In November 1995, we moved again, and this time I was determined not to have to go through the process of hiring or borrowing ladders ever again. I decided to add the cost of a mast to the new house! As soon as we moved in I set about obtaining the necessary planning permission, which was duly granted ... 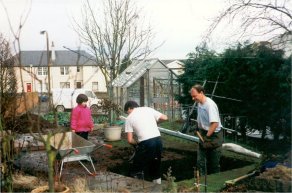 First of all, you dig a hole 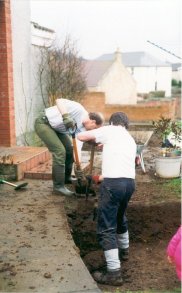 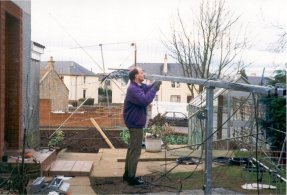 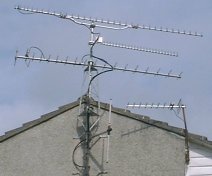 UHF antennas
Mark, the Junior Op
. . . and by March 1996, I had started digging the hole for the foundations and ordered the mast with an appropriate rotator cage. A week later, the carrier arrived and delivered the mast, or at least part of it, the cage, the ground post and the winch. The largest part, all 17 feet of it was missing and after a phone call to the carrier who was now wondering how he could loose something so big, it duly arrived two days later.


The recommended hole for the 10m Tennamast is 1m by 1m by 0.5m deep. I decided to go a bit further and make mine 2m by 2m by 0.5m deep, resulting in 2 cubic metres of concrete and according to the lorry driver who delivered it, that weighed not far short of 5 Tons! Since the garden is actually about 1m above the level of the road, all this concrete had to be barrowed, by myself up 3 steps, up a path (uphill!) then down 2 steps ... 48 loads in all! I had very long arms for a few days!


The plan was to use the Tennamast to support HF and VHF antennas. Initially it carried the CobWebb, an 8 element yagi for 2m and my 6m and 4m 3 element beams. Latterly I obtained a second-hand 2 element Mini-Quad for 10m, 15m, and 20m.


Sadly this was in poor condition. Most of the rods were broken and the nylon insulator running through the driven element had snapped. This was replaced with a piece taken from the diamond section on the rear element and new rods were made from brass rod from a model shop. Some people refer to this breed of antenna as a rotating dummy load, but I find it very effective, especially on 10m. In order to make space for the Mini-Quad I had to take down my 4m beam. In addition to these antennas, the Tennamast also supports my Fly-Trap for 160m through to 30m and a 70cm colinear at the very top. One amusing occurrence since I put up the colinear is that I’m forever getting ‘honked’ at by CBers who obviously think it is a 27MHz vertical! For guy-wires I use professional pvc-coated 4mm multi-strand steel wire. In November 1996, this array remained up during hurricane-force gales. The only effect was that the collar supporting the guys moved 2 inches down the mast! Generally the mast is dropped if high winds are forecast ... but sometimes we get caught out.


To Carry my UHF and SHF antennas, (18 ele for 70cm, 35 ele for 23cm and 25 ele for 13cm), I bolted a 2 inch aluminium scaffold pole to the side of the house. Latterly, this installation has been greatly ruggedised by housing the rotator in a modified cage from Tennamast so as to give greater protection in times of high wind.


Finally, I also have a vertical for HF. I was given a Butternut HF6V which had snapped at the base. A new ground fixing arrangement was duly conceived and I also fashioned 12m and 17m coils from central heating piping (not ideal, but they work well in the dry). The Butternut is sited next to a tree which affords it some support and surprisingly, it has worked rather well even since we built a fourth bedroom onto the side of the house, the corner of which is less than a metre away. Still, I worked the Maldives on 30m using this antenna under these less than ideal conditions!


The array atop the Tennamast is just about as large as my garden will allow. The Mini-Quad in particular is the widest antenna that I can attach to the mast without it fouling on the house when tilted over. Although a tilt-over antenna system is the ultimate in simplicity as far as maintenance is concerned. Assistance is always welcome, no matter how small ------>