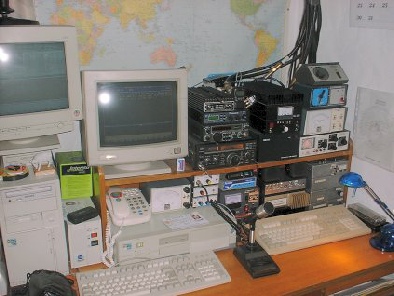 This is the shack in 2002- A culmination of over 25 years of building and collecting. I still have the IC260E that I bought in 1979, for 2m and driving transverters. The 70cm transverter is a proprietary bought in unit giving about 10W O/P, whereas all the others are ‘home-brew’. The 6m transverter, like the 70cm one, is dual-conversion and uses a home-brew 2m-HF transverter to provide the 28MHz IF. (Before I got my IC725, I used this 2m-HF box to work all over Europe on 10, 15 and 20m with less than 1W back in 1993). Output power on 6m is 15W. The Transverters for 23cm and 13cm are ‘Chinese copies’ of DB6NT’s designs published in DUBUS. The 23cm box delivers a healthy 20W and the 13cm one, around 1W.

On HF, I run a ‘much-modified’ IC725. It and the IC260 are fed into the Timewave DSP-599ZX. Audio compression on HF is achieved by way of a home-built RF Speech compressor based on a DATONG design. I don’t care much for Packet Radio except that it does have it’s uses where DX-Cluster is concerned ... and even that is non-functional in Scotland for long periods of time! However I do run PacTor and AMTOR along with SSB and CW. There was a time when I could watch television and copy CW simultaneously ... but alas, with the onset of children, CW operation took a ‘back-seat’ and my aural skill in that department diminished. But, thanks to another home-built box and some excellent software by Mike Kerry, G4BMK, I can run CW, AMTOR and PacTor from one of the three PCs in the shack. For logging purposes, I use ShackLog, by Alan Jubb, G3PMR. Although this is a DOS program, it boasts some very powerful functions, in particular rig control and the ability to read the mode and frequency from the rig when a QSO is logged. ShackLog also has a DX-Cluster interface and the ability to QSY the rig to any chosen DX ‘spot’. 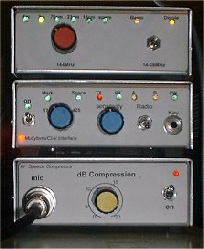 On the left ... Three of my homebrew interfaces. The one at the top controls two remote switch boxes. The red knob switches the 2m path to either the 2m amplifier (80W) or any one of the transverters. The switch on the right selects either the Mini-Quad or CobWebb for HF work.


The middle box performs two functions. Primarily it is based around the BARTG MultyTerm for G4BMK's software, but it also houses the CI-V remote interface for ICOM radios.

Finally the box at the bottom is the DATONG-based RF Speech Compressor 'in front' of the IC725.


It probably goes without saying, that behind most radios, there lies a veritable rat’s nest of cables etc. And my shack is no exception. Every antenna is fed with hard-line coax and most of the connections inside the shack are made using professional grade triple-screened coax (the purple stuff). Both the coax switches in the photograph above can also be seen in the shot of my shack in 1980! The 5-way slider switch intended for HF use but used on 2m was becoming a bit of a liability and I could never remember which antenna was connected to which port on the 2-way switch! 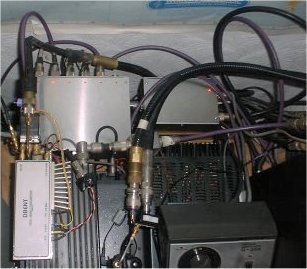 Recently, I had the idea to get rid of the need to lean over the back of the radios in order to change transverters or switch antennas on HF. So I built the two shiny boxes in the photograph on the right. The box on the left routes the 144MHz from the IC260 to any of the various transverters with a spare port available for future expansion. The box on the right houses a beefy relay which switches been the Cobwebb and the Mini-Quad. 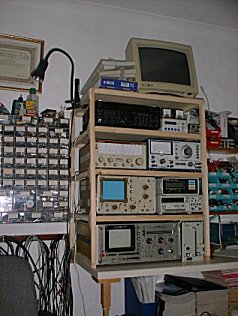 What shack wouldn’t be complete without test equipment? Quite a few actually! When I was first licensed in 1976, there wasn’t the plethora of ‘black boxes’ that there is today. And as far as VHF, UHF and above was concerned, most newcomers to the hobby simply built their own kit or converted commercial boxes. Sadly, there is little incentive today for the newcomer to get involved with home construction. However some of us still get a real kick out of operating kit which we have built ourselves. I’ve been doing it for nearly 25 years now and I still hate metal-work!!

The summer of 2002 witnessed big changes to the station layout. I made the decision to ‘come off’ 6m since I was unhappy with the VSWR on the 3 ele. beam. Basically, it’s position on the mast, with the coax for it and the other antennas running through it, resulted in the VSWR changing with beam-heading . . . . A far from ideal situation! So the 6m transverter (10m-6m) and the accompanying HF transverter (2m-10,15 and 20m) were stripped out. This prompted me to carry out a long planned refurbishment of the operating position . . . . . A job made easier by the fact that both children were on holiday at their Grandparent’s and I needed their bedrooms to store all the contents of the shack! This was a job that I had been planning and dreading for months! 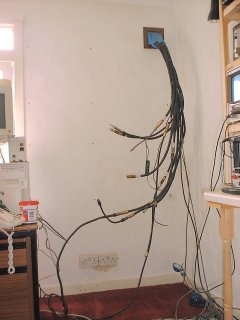 Basically, the operating position has ‘evolved’ over the last 6 years at this QTH and the number of computers had risen from 1 to 3. My log and rig control is handled by a 200MHz Cyrix based machine. RTTY etc., high-speed CW is handled by a 100MHz AMD box and everything else in the shack is run on a 1GHz P3 machine. I wanted a shack where any one piece of equipment could be moved with the minimum of disturbance to the rest of the shack. We had also developed an earth-loop problem which had made it necessary to disconnect the IC725 from the MultyTerm and thus loose RTTY. I hoped that the plans I had for the revised wiring would resolve this issue. Rather than simply stacking equipment on top of equipment, I elected for a more ergonomic and logical layout arranged on a series of wall mounted shelves. 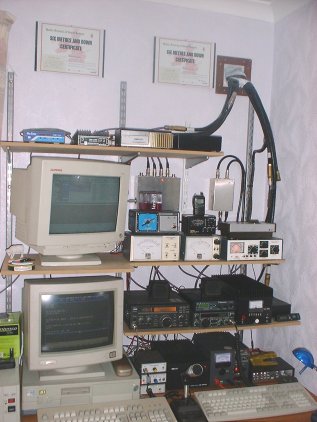 Someone once likened it to the Starship Enterprise!

It took just under a week to accomplish the task . . . taking the opportunity to re-paint the walls and woodwork and generally brighten the place up! The revised layout has, as envisaged, resulted in much more desk space for making notes and an easier to maintain station. The top shelf comprises my 70cm, 23cm and 13cm transverters along with the 144MHz linear amplifier and currently redundant packet TNC (‘cos we don’t have DX Cluster access in Scotland!). The second shelf supports the monitor for the logging and rig-control PC, along with power meters, ATU and the two rotator controllers. The first shelf supports the IC725, home-brew 300W HF amplifier, IC260 and Timewave 599ZX DSP unit. I extended the back of the desk to support 2 of the 3 PSUs (the 50V PSU for the HF amp is under the desk), the transverter control unit, remote switch controller, MultyTerm and RF Speech Compressor. Rather than having long wires from each box running back to the PSU, there is now a high-current LV ‘bus’ installed with convenient insertion points for the various pieces of equipment. The earthing has also been ‘rationalised’ in a similar way and has indeed resolved the problem as previously mentioned to the effect that we are now once again RTTY QRV.