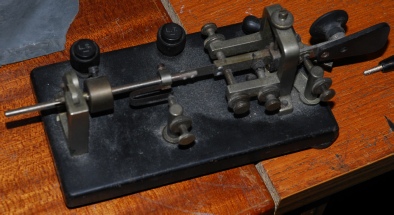 I had been on the lookout for a genuine Vibroplex ‘bug’ key for some time. The one in the picture on the left. This is ostensibly a Vibroplex ‘Original’. Sadly the serial plate is missing so there is a limit as to how accurate we can date it. However the base plate bears the original black ‘Japanned’ finish which puts it earlier than 1938/9 when Vibroplex began using a black crackle finish. The paddle and knob are plastic as opposed to Bakelite, so I think that puts it closer to the late 1930s than the early 1920s. As well as being decidedly grubby, the two nickel-plated binding posts had been replaced with ugly insulated ones. One of the brass strips under the base plate had been replaced with a heavy wire and the three rubber feet were as hard as glass! 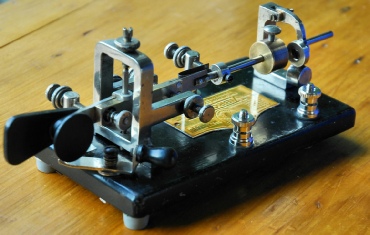 Hard to imagine, but the photograph on the right is the same key! The nickel-plated parts cleaned up rather nicely. I got a couple of nickel-plated non-insulated 2BA binding-posts on Ebay and replaced the rock-hard feet with new rubber ones. I managed to find a good photograph of a suitable brass serial plate and printed it onto glossy paper which I then built up to two layers of paper to give it a more authentic appearance. This is a very pleasant key to use with a light yet positive action. The thickness of the pendulum main-spring is 0.013in which allows the user to slow the speed down to something in the region of 15 w.p.m by positioning the 1oz brass weight on the far side of the damping weight. 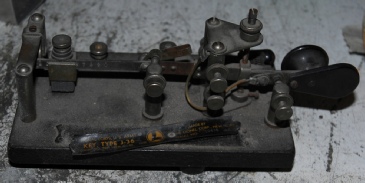 The second ‘Vobroplex’  (on the left) is not strictly one as such since it was manufactured by The Lionel Corporation. This is a U. S. Army Signal Corps J-36 and was manufactured some time after 1942 but likely before 1945. J-36 was the Signal Corps designation for ‘any’ bug-key. Like my ‘Original’, this one, which belongs to a friend was in a very sorry state. Unlike Vibroplex and others, Lionel fitted a celluloid serial plate. Over time, these shrink and pull away from the rivets which hold it to the base-plate. 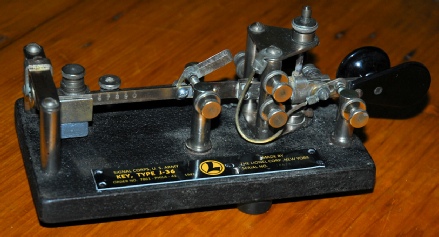 J-36’s of the era were based on the Vibroplex ‘Lightning Bug’. I will venture that this was for two reasons. Firstly, as its name suggests, it is a very fast key. The thickness of the main-spring is 0.016in. Secondly, being completely lacking in cast components, it was also a very easy key to mass-produce. Lionel manufactured over twenty-eight thousand of these keys between 1942 and 1945. Apart from the damaged label, the only deviation from the original was the missing knurled dash-tension adjustment nut which had been replaced with a hex nut. After cleaning all the parts, I reassembled it, swapping the knurled nut securing the dot spring with the hex nut. I also made up a replica serial label. I believe the wire between the dash terminal on the pendulum to the top bracket is an after-market modification because there is poor continuity between the dash contact and the pendulum pivot. Also … Note the extra weight to 'slow' the key down.
Lionel Corporation
« previous
next »