7 minute read
This post is part of the series 'Sideband Adapters':

I thought it would be appropriate to take a comparative look at all four Sideband adapters. All four are made up of the same common building blocks. So what distinguishes one from the other? They all have two Local Oscillators making them effectively dual conversion receivers operating at a fixed input frequency of 100KHz (with one or two exceptions … see below)

With only 6 valves, and one of these is a rectifier, the RA63 is the simplest of the four Sideband adapters. It is also the only one that can truly be called an SSB adapter since all the others are essentially Independent Sideband Adapters. The RA63 really was designed to satisfy the need for SSB reception and little else. There are no crystal oscillators involved (with the exception of the D & K variants). Both Oscillators are relatively simple, yet stable L-C oscillators with the 1st LO 18KHz below the 100KHz IF input at 82KHz. Fine tuning is achieved over a range of +/- 1KHz by tuning the 1st LO.

There are however variations. The RA63C was designed for an IF of 465KHz whilst the RA63E catered for an IF of 455KHz. The RA63D and K both employ crystal controlled oscillators with the 1st LO oscillator being temperature controlled and running at 118KHz, and the 2nd LO using the same dual-element 18KHz crystal as in the RA98 and RA218. Here, the LP and HP filters are accordingly swapped since the 1st LO is now above the 100KHz IF.

September 2017: Whilst repairing an RA63H and and RA63K I was able to perform some tests around the filters. Unlike most modern SSB receivers, Racal’s adapters do NOT employ crystal lattice filters. Instead, the Sideband filters use tuned LC elements. This is probably why an IF of 18KHz was chosen. This also eliminates the often unwanted side effect of ‘ringing’. It is probably overlooked by many, that the Low-Pass and High-Pass filters themselves only satisfy part of the converter’s bandwidth specification. In essence the actual bandwidth of the Sideband Adapter is governed not by these complex filters but by the much simpler Band-Pass filter that precedes them. The Sideband filters provide an effective ‘brick wall’ at the LF end of the response with the Bandpass filter providing the upper limit of the response. In the RA63 and RA218, the BPF response is given as 15KHz - 21KHz; thus, the effective bandwidth is 3KHz (nominal). See the diagram below for an explanation.

Filters explained:
Filter-wise, the RA63 and RA218 are similar in that both employ a Bandpass filter centred on 18KHz, with a response of 15KHz to 21KHz (6KHz B/W). In the RA63, the Sideband filters, Low Pass and High Pass, have cut-off frequencies of 17.5KHz and 18.5KHz respectively. Thus, in the RA63, when the Low Pass filter is selected, the overall frequency response is 15KHz to 17.5KHz (2.5KHz B/W) and when the High Pass filter is selected, the frequency response is 18.5KHz to 21KHz (2.5KHz B/W). When the output of the combined filter is applied to the 2nd mixer (product detector) and mixed with 18.000KHz the output is therefor audio in the range 500Hz to 2.5KHz. A second Low Pass filter on the input to the audio stage eliminates unwanted products.

The RA218 filtering is slightly different. Although the pass-band of the bandpass filter is the same as that in the RA63, the design is more complex, offering a tighter bandwidth. Also, the LP and HP filters are different … this time offering a cut-off closer to 18KHz, resulting in a slightly wider bandwidth. Thus the overall audio bandwidth of the RA218 is nominally 350Hz to 2.5KHz. 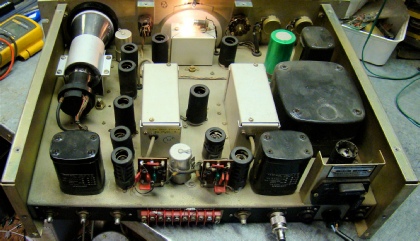 I am indebted to Brian Goldsmith for sending me these photographs of his RA121. This could be described as Racal’s first true Independent Sideband Adapter and was very likely designed with RTTY in mind. Although, like all ISB adapters, it can be used for SSB reception but the overall bandwidth is a bit on the wide side at 6KHz. The Bandpass, Low Pass and High Pass filters are identical to those employed in the more sophisticated RA98 … and like in the latter, the RA121 does provide a vestige of AFC (Automatic Frequency Control), albeit rudimentary and limited. Thus, keeping the RA121 centred on frequency is essentially a manual affair … hence the cute little CRT. The operator simply adjusts the fine tune control (big knob in the centre) for the most stable circular Lissajous figure. There is no built-in loudspeaker; only 1/4-inch jacks for monitor headphones. However there are two independent 3-ohm outputs at the rear.

The RA218 was specifically designed to compliment the RA117 as part of a Royal Navy installation known as CJK. Like the RA121, it is a true ISB adapter. Although, unlike the RA121, there is no AFC. However, the RA218 is fully crystal controlled. The 1st LO is centred on 118KHz with 3 selectable oven-stabilised crystals allowing the LO to be shifted +/- 1.5KHz, whilst the 2nd LO is a dual-element 18KHz crystal oscillator. A further two oven-stabilised crystal oscillators combine to produce a super-stable 1.7MHz signal which can be used to replace the 3rd LO in the RA117. This signal is intended to provide fine tuning of the RA117.
Filter-wise, the RA218 is narrower than the RA121 with an overall bandwidth of 3KHz, like the RA63. However the filters used are different and offer a slightly lower LF response and a steeper HF roll-off. As in the RA121, there is no built-in loudspeaker. The base-band output is intended for transmission via 600-ohm line only. Thus to use the RA218 as an SSB adapter, one has to listen via the front panel headphone monitor jacks or construct an external audio amplifier. 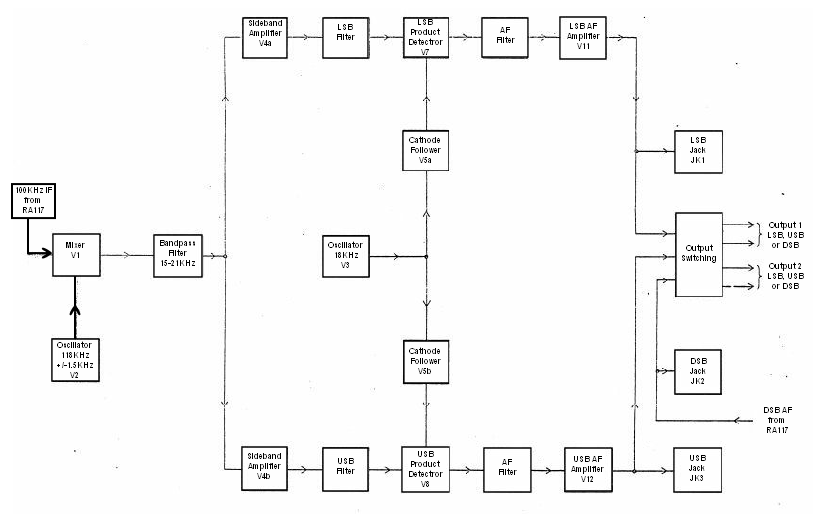 The fourth, and undoubtedly most sophisticated of Racal’s ISB adapters. The overall audio bandwidth is back up to 6KHz but unlike the RA218, only the 18KHz 2nd local oscillator is crystal controlled. However, the RA98 employs a fiendishly clever motorised mechanical AFC system to keep the adapter locked to the carrier of the received signal.
Setting up the AFC is somewhat tricky since the AFC bandwidth is very narrow. Also, the section in the manual regarding alignment of this circuit is beautifully vague. The AFC discriminator uses a nominally 90KHz crystal with what appears to be different series and parallel resonances. This is where the manual is a bit vague, so my intension is to use my network analyser to come up with a method of guaranteeing that the upper and lower resonances are equally spaced either side of 90KHz (5 x 18KHz), which should equate to 100KHz. So far I have been unsuccessful, but I’m working on it. Baseband output is as per the RA218: headphones or 600-ohm line. The RA98 is also the only ISB adapter in the series to provide AGC control of the receiver.

The BBC used banks of these with modified filter bandwidths at their Ascension Island re-broadcast station. some interesting photographs can be found here and here. 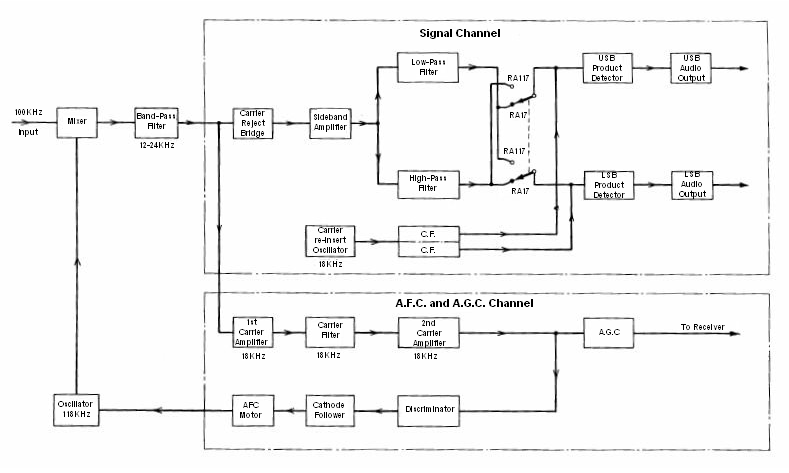 Next post in the series: The Racal RA98
« previous
next »