Experiments with a Half-Size G5RV

Its now the middle of April 2005 and Winter is now finally over! Or at least that is how it feels. Today it is sunny and relatively warm . . . Warm enough to carry out some antenna work. Back in November 2004 the H.F. antennas were dropped in response to gale-force winds . Then in February this year, with the mast still down, I took the opportunity to investigate the increasingly erratic behaviour of the main rotator. On opening it up, I discovered that the friction brake assembly was damaged and that one of the nylon gears was out of alignment. This damage was very likely the result of the massive G-force incurred when the mast suddenly dropped 5m when the winch cable snapped back in 2003. Realigning the gear was a simple affair. Repairing the friction brake required a little engineering work, but everything was back on the mast later the same day. However, on winding the mast back up, I became concerned regarding some unhealthy sounds coming from the winch, so I left the mast vertical and opted not to wind it up to its full height. Fearing that something was about to give way, and coupled with the fact that there was almost no thread left on the shaft that the handle attached to, I obtained a replacement winch from Tennamast. With the new winch installed, I examined the old one which appeared sound. Other than 10 years of grime, a stripped thread and perhaps a little too much play on the end bearings, it appeared OK, but in contrast, the new one didn’t complain with ominous creaks, and my confidence was renewed.

I had considered putting the mast back up there and then, but events overtook me as contractors set about 10 weeks of road, footpath and lighting refurbishment. Since one leg of my ‘Fly-Trap’ inverted-V actually goes over one of the footpaths, I felt it prudent to disconnect it from its anchor point and leave the mast down until the work was complete. Having re-built the ‘Fly-Trap’ using professional antenna wire back in 2003, and then going on to make a ‘copy’ for a friend, I still had a reasonable amount of wire and other hardware left, so I decided to construct a simple, all-round antenna that would be independent of the mast. It has to be said that here in central Scotland, we do experience very strong winds from time to time and I was eager to have some form of H.F. Antenna that would be available at all times. The obvious choice was a G5RV, however I do not have the space for a full size ‘RV’ so I opted for the ‘Half-Size’ version which would be fed with 300 ohm ribbon all the way from the Vectronics VC-300 in the shack. I am fortunate to have two large mature Silver-Birches and two mature Rowans. One of the Rowans already serves as the anchor point for the North leg of the Inverted-V. Now one of the Silver-Birches was going to support the centre of the ‘Half-Size RV’. During the year (any year), I loose count of the number of ‘flaky’ tradesmen I receive at the door offering to cut down my trees. To the imaginative Radio Amateur, trees are very useful! 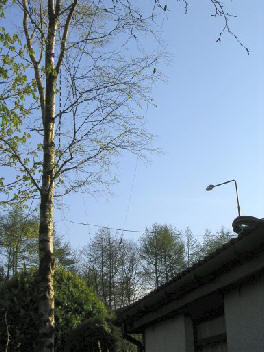 I have to say that I am very impressed with the performance of this little antenna. The centre is only about 7m above the ground. The feed from the shack is 300 ohm ribbon, but the final feed up to the centre of the antenna is 450 ohm, with the final 4m or so more or less vertical (see the picture on the right). Receive performance on 20m is at times better than my CobWebb and or comparable with the Mini-Quad. Obviously there are a lot of factors to take into account when comparing antennas. The CobWebb for instance offers no vertical component, whereas the ‘RV’ does. Therefore the performance of any antenna also depends on the mode of propagation at hand. Thus it is unfair to say that one antenna is better than another. With its vertical component, the ‘RV’ provides me with an antenna capable of dealing with signals where reception is predominantly vertical. With that in mind, the ‘RV’ will from now on not only serve as my emergency, all-weather antenna, it will definitely take its place as one of 4 selectable H.F. Antennas. There is one draw-back though with the ‘RV’. It does tend to generate a degree of TVI. Therefore I will probably have to limit the hours that I transmit into it to ‘day-time’ operation.