August 2013: The sun is shining (still) as I sit in my newly refurbished radio-room/study/workshop. Perhaps it wasn’t wise to undertake the task during the hottest summer in decades … but its done now and I’m very satisfied with the result. The last time the ‘shack ‘ was refurbished was back in 2002, so it was well overdue for a ‘refit’. 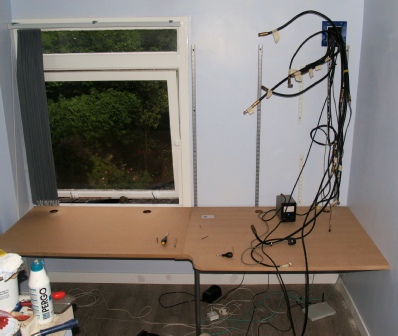 This time the room was stripped right back to four bare walls. The aging carpet was disposed of and a light-grey laminate floor laid. The two office desks were also removed and replaced with a bespoke MDF table which was deliberately made from two pieces to make it easier to fashion the curved part. It is attached to the wall at the rear and RHS, with a leg at the front RHS and in the centre. The thickness is 25mm with a further 25mm piece about two thirds of the way back running the full width for added strength. The number of cables passing through the hole in the wall is more or less the same as eleven years ago. 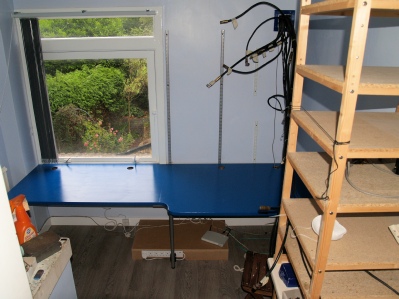 I’ll admit that the new colour-scheme is very much in line with my collection of RACAL receivers. The desk/table was painted a shade of blue that contrasted nicely with the walls and ceiling. The box on the floor is a plinth for carrying my two PCs and some heavy-weight power-supplies. When I took the shack apart I discovered that I had used no less than fifteen 4-gang mains adapters, so a major part of this exercise was to reconfigure the power distribution. 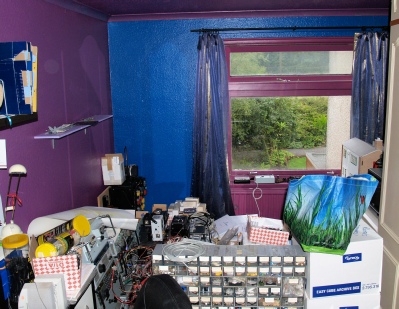 … But where did all the stuff go that came out of the shack?

Answer: Next door! … into the spare room. Note the colour scheme! This was ostensibly my daughter’s room. Rachel and her husband Simon both graduated from St. Andrews University at the start of the summer. They have since moved into a flat in Edinburgh but we had to wait until all of Rachel’s belongings were cleared out before I could refill it with the contents of the shack. This I did with ease! 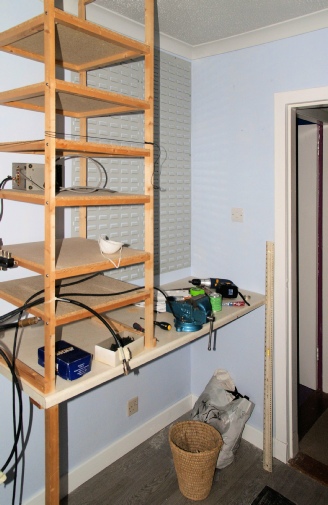 Many a visitor to my shack in the past has commented on the precarious nature of the array of plastic bins piled one on top of the other behind the pillar drill above one of the benches. Well, fear no more folks! The boxes are now held securely in place by appropriate louvred steel racking. I resisted the temptation to paint the wooden rack. Like before, it is screwed to the ceiling AND the bench on which it sits. I could probably remove the leg at the corner and it would stay up … but it would creak a bit, so I won’t! 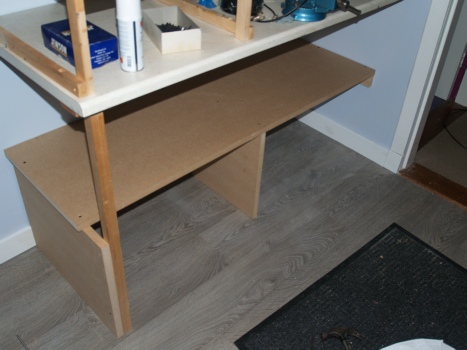 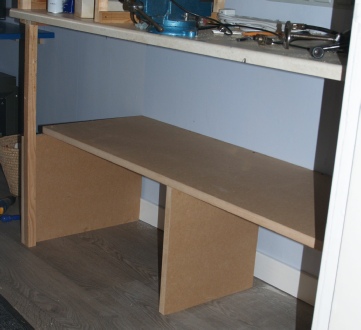 Previously the early RACAL kit sat on what were originally two display cabinets. They did the job but were only just big enough. These have now been replaced with a bespoke shelf/support made from the same 25mm MDF as the new desk. The other two vertical supports for the work bench have not been re-fitted at this point. 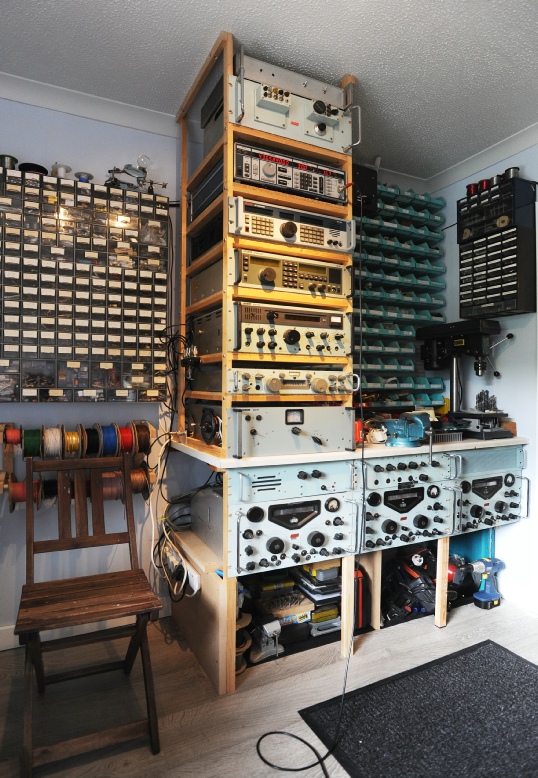 My thanks to Alan, GM0USI for this photograph of my RACAL ‘shrine’.

Only one piece of hardware didn’t survive the move into the next room and back again. Note the coax lead dangling from the Adret signal generator. On powering it up, it was clear from the ‘garbage’ on the LED displays that all was not well. This was eventually tracked down to a faulty Octal Buffer and a dry joint on the CPU board. At the time the photograph was taken, the Adret was on soak-test … hence the coax.

The rolls of wire on the wall are a new addition … much better than all over the floor! 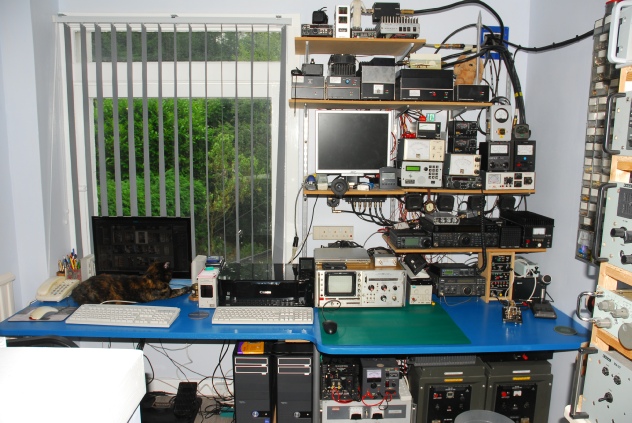 Two views of the other end of the shack. The computers are now under the desk along with all but one of the shack PSUs. The printer which was previously under the RA17s is now on top of the desk. The new ‘extended’ desk has an anti-static mat on top. Note the ADSL router and network switch in a box attached to the underside of the desk. Also visible on the rear wall above the spectrum analyser are the switches for routing the HF antennas to the various radios. 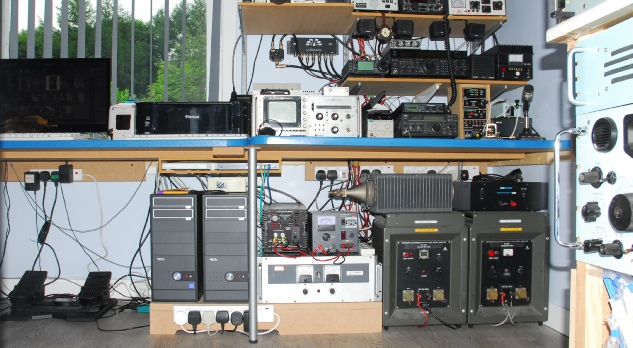 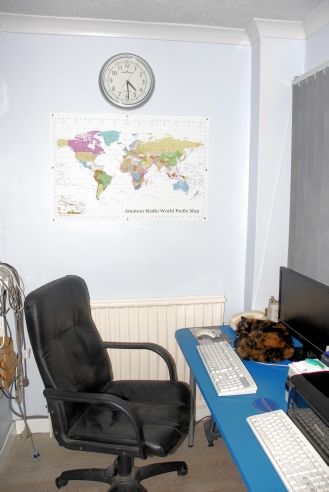 Look left, look right … The comfy chair at the left hand side of the desk … and what is often referred to as ‘the operating position’ on the right. 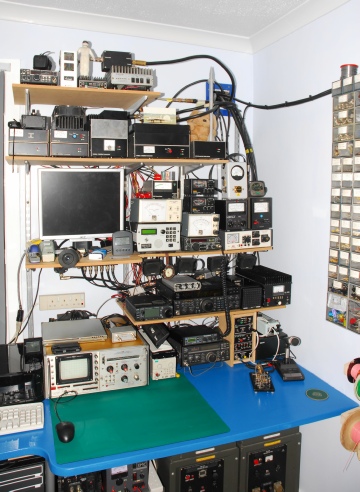 … and behind the comfy chair we have the main electronics work bench. My T.1154/R.1155 setup sits here. But this is also where RA17s get ‘the treatment’. I recently inherited some antique books on radio. Some date back to the early 1920s! These along with my collection of 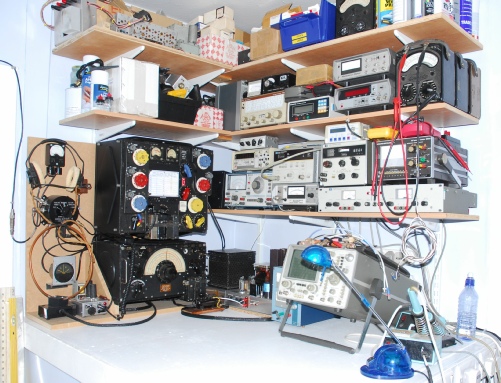 RACAL manuals have been moved out of the shack onto a proper bookshelf. Now that the shack has been refurbished, I can now get back to restoring two more RA17Ls that are taking up space!
GM0USI
« previous
next »