How does one become interested in Amateur Radio? What is there to generate an interest in radio in the first place? In my mind, today’s 21st Century kids have it too easy, with literally dozens of TV channels to choose from and a similar number of ‘FM’ radio stations eager to bombard them with mindless crap 24 hours a day! Today’s kids do not appear to be encouraged to think for themselves. Technology is too readily available to the extent that some folks have a TV in every room. I spoke to one person lately who was astounded that her mother had just bought a 32-inch Flat-Screen TV for the kitchen!! The advent of the MP3 player followed by the smart-phone has made it possible to listen to music literally anywhere. Such abundance and availability of technology has perhaps dulled the imagination and creativity of 21st century kids. Forgive me if I sound like an old man, but when I was growing up, we had two TV channels and those were in black and White and if you wanted to listen to the ‘Stones’ or ‘The Beatles’ you had to know where to find the local pirate radio station and that often meant being creative.


Going back a bit ... It was only after my father died in 1990 that I learned that the radiogram (generally a valve-based radio with an auto-changer record deck) that had graced our living room in the 1960s had actually been built by my father and his brother-in-law from scratch, literally! This was way before kids had their own radio or even TV for that matter. In those days, what I listened to (or more correctly, what I heard) was dictated by my parents. Thus, I was brought up (initially) listening to the ‘The Light Program’ or ‘The Home Service’ ... where everyone spoke with perfectly precise BBC diction. Then I discovered the Pirate Radio station Radio Scotland, anchored off Dunbar. “Turn that noise off!” My mother simply didn’t understand the younger people of the day, so I kept listening to The Light Program and The Home Service.


I was missing out big time! I remember once when I was probably 8 or 9 years old ... The teacher asked the whole class to name their favourite pop singers. Well ... When everyone else was saying The Beatles or The Four Tops or The Rolling Stones ... I could only think of Val Doonigan and Rolf Harris!!! (oops!) Off course, the whole class laughed. It wasn’t that my parents didn’t allow me to have my own radio, it was just never considered. I think my first ‘personal’ radio, and I use the term loosely, was a 1940s vintage Sobel which I picked up at a jumble sale when I was probably 10 years old. By then the BBC had cast off its 'Dinner Suit' image and Radios One, Two, Three and Four were born. However I wasn’t too bothered with the BBC, but more interested in exploring the world of Short Wave Radio and soon had a long wire dangling out across the garden from my bedroom window. This was during the height of The Cold War and it was amusing then, listening to stations like Radio Tirana enthusing about the current potato harvest or the number of tractors that had been produced.


For some reason though, my mother intensely disliked it when I sat up at night tuning across the bands, logging the stations that I picked up. Only later did I learn that her own father had been an ardent Short Wave Listener who had listened late into the night, much to everyone else's annoyance. He was also a womaniser and my Grandmother had thrown him out the house eventually. Obviously my listening habits reminded my mother of her own father ... but in time she accepted the fact that I had probably inherited some of my grandfather’s interests ... maybe radio was in my blood ... at least I’m NOT a womaniser! In time, numerous valve radios went through my possession. Then one day I stumbled across the 80m band. It was a Saturday morning and I remember listening to these guys talking (they were running AM), one of them was mobile, and they were obviously local to me. It wasn’t long after that, that I picked up an R1155 receiver complete with bullet-hole through the DF-Section (or so I liked to think) and was able to resolve my first SSB stations.


What follows should provide an insight into my life as a Radio Amateur since August 1976 when at the age of 18, I was first licenced as GM8LWR ... From when my equipment consisted of nothing more than a 2m AM transceiver on a single spot-frequency to the current multi-band HF through to Microwave station that I operate today. This has been a journey that has taken over forty years and is far from over. 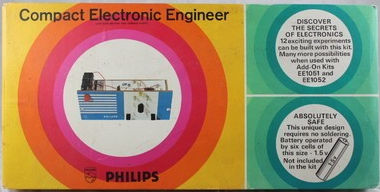 Philips EE1050 Electronics Kit circa 1970?
If I were asked how I got ‘into’ Amateur Radio, I suppose that I would have to ‘blame’ my parents. I believe it was when I was 12 years old that I received an ‘Electronics Kit’ for Christmas. This ran off batteries which off course were not provided and my parents had not foreseen this either ... and being Christmas, all the shops were shut! Off to a right good start ... NOT!


Surprisingly, this kit did not include the mandatory crystal-set, but through a friend I managed to find the parts and made one anyway. In those days, most people still had ‘valve’ radios and televisions. The radios often found their way into the local church fete to be sold and I would invariably buy one. I was always on the look out for Short-Wave radios. Needless to say, quite a few receivers went through my possession.


My Scout Master at the time worked for Ferranti and took a group of us under his wing with the intention of coaching us towards the 'Electronics Badge'. This was probably 1971. Every Monday night we would gather at his house and take notes on basic electronic theory and assemble on vero board such projects as a multivibrator or an audio amplifier. My soldering was absolutely shocking! By pure coincidence, I was handed a huge pile of magazines ... Practical Wireless and Practical Television, mostly from the late 1950s and early 1960s. I was mesmerised by the articles and circuit diagrams. I'll be honest, I didn't understand much of it but I was determined to have a go at building something else. I was definitely hooked. But first I would need components. In those days I think there were only two shops in Edinburgh which sold electronic components. Then a friend and I stumbled upon a seemingly endless source of FREE components.


These were the days of the Television Rental shops, and walking home from school one afternoon, my friend and I came across a huge pile of television sets that had been dumped just next to the railway line that ran along-side our walk home. We couldn't believe our luck and devised a way to get them back home. His parents were having 'none of it' but I managed to clear out the garden shed and soon had a huge pile of ancient TV sets which I began to strip down, naiively believing that this trove of parts was the answer to our needs. For a very long time, nothing that I made worked. It was only after measuring the values of what I thought were resistors did I discover that they were capacitors. This was an easy mistake to make. Salvaging components from televisions manufactured in the 50s was yielding components, some of which I had never seen before. There were these red resistors which were marked 10K and 1K ... or so I thought. These turned out to be 10nF and 1nF capacitors ... a lesson learned! One thing we did manage to achieve was turning an old TV into something akin to an oscilloscope ... after-all, an oscilloscope is a 'must have' when you are a school-boy! It only had one sweep rate which was shockingly non-linear and the sensitivity was poor ... but it worked!


At school, one of the physics teachers started an Electronics club and my friend and I announced that we wanted to build an oscilloscope ... a proper one. The closest we got was getting a spot on a 1940s vintage CRT. And then we found an Indicator Type 62 (out of a WW2 bomber) in a shop in Edinburgh (who remembers Miller's Wireless?) This could be turned into a working 'scope, or so we thought. We were eternal optimists! So we stripped it down ... sacriledge! Around the same time (probably now 1973) I rescued an R1155, complete with bullet hole right through the chassis, from that same shop in Edinburgh. Fortunately, the shell had gone through the DF circuit and the rest of the RX was coaxed back into life by comparing it with a working model and replacing the parts that appeared to be missing. This was my first genuine HF receiver and with the BFO I was now able to make sense of SSB signals.
EE1050
next »