Here we have a series of galleries displaying one QSL card from each of the 260 DXCC countries that I have worked on the HF amateur bands since 1993. ‘Radio Hams’ have been exchanging cards (called QSL cards) since the early days of radio and such an exchange was considered the ultimate courtesy. Cards are exchanged in two ways. Either the operators simply send direct or they use a central collection bureau, if available. If sending cards ‘direct’, it is considered polite to include some form of reimbursement. Some Radio-Hams also collect postage stamps and in some cases a packet of used stamps is/was sufficient, but more commonly, the IRC (international Reply Coupon) issued by the Universal Postal Union was the universal currency used. These could be purchased at most Post Offices in UPU-Member countries where they would be stamped on issue. Initially these had no expiry date and it was common for them to circulate around the globe without being redeemed. They effectively became universal currency amongst QSL collectors. Below is an example of an IRC issued in Germany in 1992. 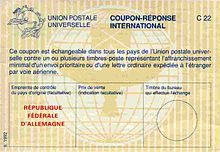 But this was to change when the UPU introduced an expiry date on IRCs. I cannot remember the date in question. Thereafter, IRCs were issued on a yearly basis … that is, ALL IRCs would be simultaneously issued on July 1. Those issued in 2009 for instance would expire on December 31 2012, thus allowing those in circulation to be used up. Meanwhile, those since published on July 1 2012 would be useable up until December 31 2015. This expiry feature became unpopular with Radio Hams. The US Postal Service discontinued sales of IRCs on 27 January 2013 due to declining demand. Britain's Royal Mail ceased to sell IRCs from 18 February 2012, citing minimal sales and claiming that the average post office sold less than one IRC per year. This decline in popularity was more than likely due to the advent of the Internet which also brought about a change in the way an increasing number of Radio Hams dealt with ‘QSLing’. A system known a eQSL was introduced where operators would send each other an image of their QSL card. It doesn’t take much to realise that this system made it relatively simple for some unscrupulous individuals to ‘fake’ QSLs. This has largely been superceded by a system known as Logbook of The World or LoTW. This is essentially a world-wide database where operators upload their logbooks. Entries are ratified and contacts automatically confirmed. The system works very well, although I don’t use it myself. I much preferred the collection of cards. As it is, I have worked 260 unique DXCC countries (or entities) since 1993 and have a QSL card from every single one.

Use the sidebar to navigate to the actual QSL archive.