"You can have it any color you like, as long as it's black' - Henry Ford
New 9cm transverter second from right


The acquisition of a second Ionica 3.4GHz PA prompted a rebuilding of the 9cm transverter. A rummage through the microwave bits box yielded a nice Anaren in-pase power-splitter and an ARRA 90-degree combiner ... Just what was needed to combine two Ionica PAs in ‘Push-Pull’. It wasn’t until I experimented with the new layout that I realised what I had accomplished when I shoe-horned the original into such a small box! The new twin-PA design would take on the familiar double box construction with the transverter and associated electronics in the bottom box and the PAs and associated microwave parts in the upper box. 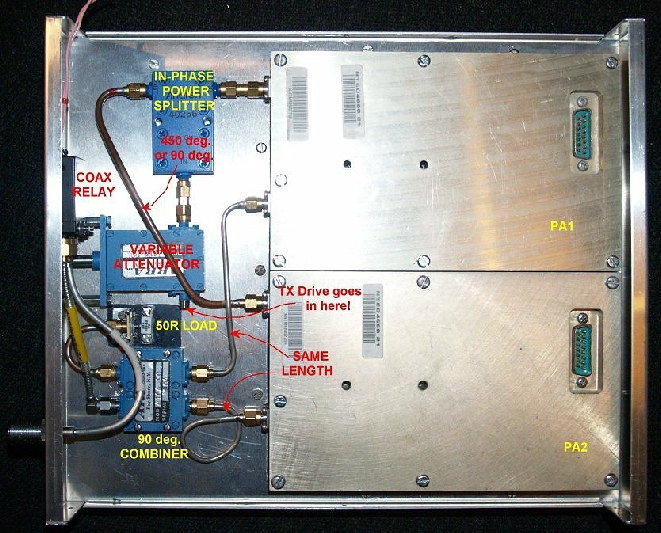 The photograph on the left shows the hardware necessary for combining the two PAs. I am indebted to Mark GM4ISM for providing the dimensions for achieving 90 degrees of shift in UT141 coax. This is achieved in the diagonal length in the picture, which is actually 450 degrees in length. That and the two equal lengths to the combiner were accurately cut to 1mm tolerance. The 50R load on the combiner is a 100W job. A bit of over-kill but it was going for a ‘song’ on Ebay! On a suitable heat-sink, it doesn’t even get warm. 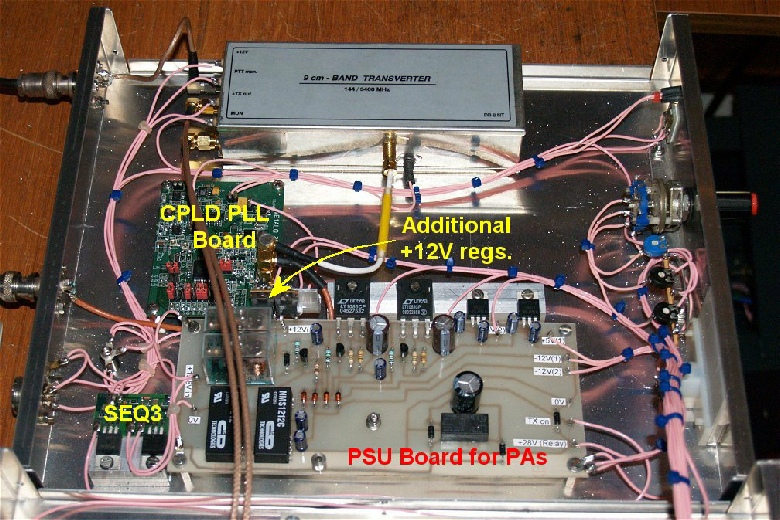 
I was in two minds as to whether two independent PSUs were required for the two PAs or if a single PSU would suffice. I believe the answer to that one is a 'definite' on the 2 PSUs! The PSU in my original transverter was completely solid state, i.e. ALL the switching was done with MOSFETs. However, even the beefiest MOSFETS incur IR losses. This time round I opted for a pair of high current relays to switch the bulk of the current. A small oversight on my part resulted in the +12V supplies NOT being isolated from each other. When testing the completed transverter, one of the PAs oscillated ... but only when both were powered. There is a reference on GM4ISM’s website which suggests that for maximum stability, at no time should the +12V line exceed +13.7V. Since this is the bulk DC input, it is set at +13.8V in my case. Mark goes on to suggest that a maximum of +12.5V for this line is probably what to aim for. So I knocked up a little plate with a couple of 7812 regulators on it and both PAs behave themselves now. 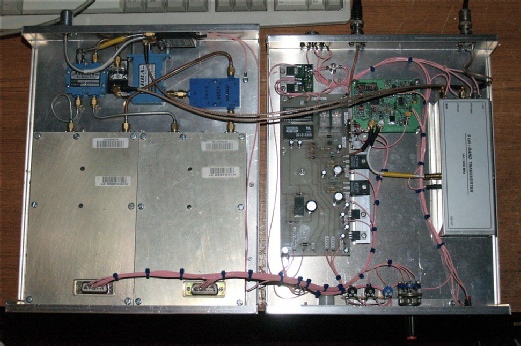 The completed transverter minus the lid(s)

Once all uncertainties are taken into account, the output from the pair of Ionica PAs is in the region of 25W, which, for a pair of 14W units is very acceptable ... even if the new transverter is three times the size of the original!