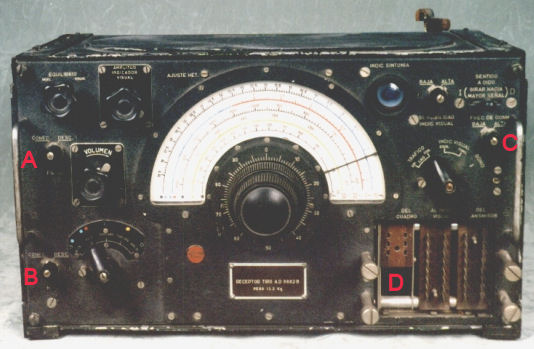 Spanish A.D.8882B
Back in January 2012 I ‘stumbled’ upon the above intriguing photograph. Anyone familiar with the R1155/AD8882B will instantly notice various mechanical inconsistencies. With the exception of the type-13 tuning knob, the rest of the front panel controls are all different. I have labelled the four most obvious ‘variations’ A through D. ‘A’ is very likely the ‘hum filter’ switch in a different location. ‘B’ and ‘C’ are clearly the ‘Heterodyne’ and ‘Switch Speed’ controls. All three switches are not the usual toggle type but turn-type ... or so the photograph suggests. However the familiar Jones connectors (‘D’) have been ‘replaced’ by something completely different. The Website on which I found this photograph states that this specimen was manufactured in Spain in 1937. And gives the serial number as 54772. I have reason to believe that whereas the serial number may well be correct, the date of manufacture of 1937 is highly dubious since Marconi were not contracted to develop the type until late 1939. There is a possibility that the date of manufacture might be 1947 ... But then why does it sport the early type-13 tuning drive that was replaced in 1942, and the dubious vernier scale that was probably omitted as early as 1941?

Also, bear in mind that Britain was at war when the type was developed in response to an Air Ministry directive and therefore the design would NOT be shared with a then fascist, albeit neutral state. It might be that what we are looking at here is an example of a pre-production prototype; hence the already outlined differences, and that it was sold on to the Spanish after the end of hostilities. I have it on good authority that a number of R1155s with Spanish labelling turned up in South America some time ago. 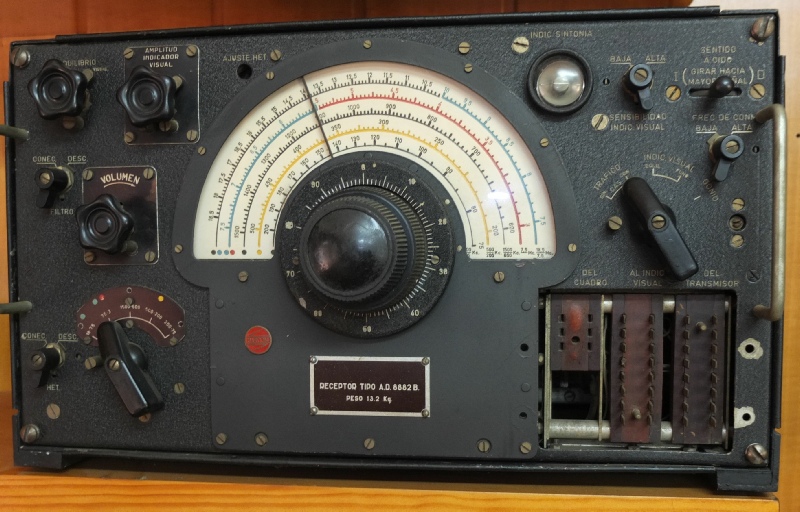 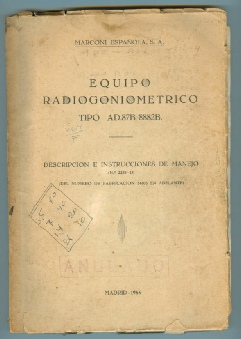 Then only recently (January 2013), I received an email from Antonio EA3AGZ who sent me this beautiful photograph of his Spanish-made AD.8882B that he has owned for 35 years. He also has the manual for the complete aircraft installation (right) dated ‘Madrid 1955’. Antonio believes that the AD.8882B and AD.87B Transmitter were manufactured in Spain by Marconi Espanola S. A. up until 1962. I don’t know when production in Spain was started. 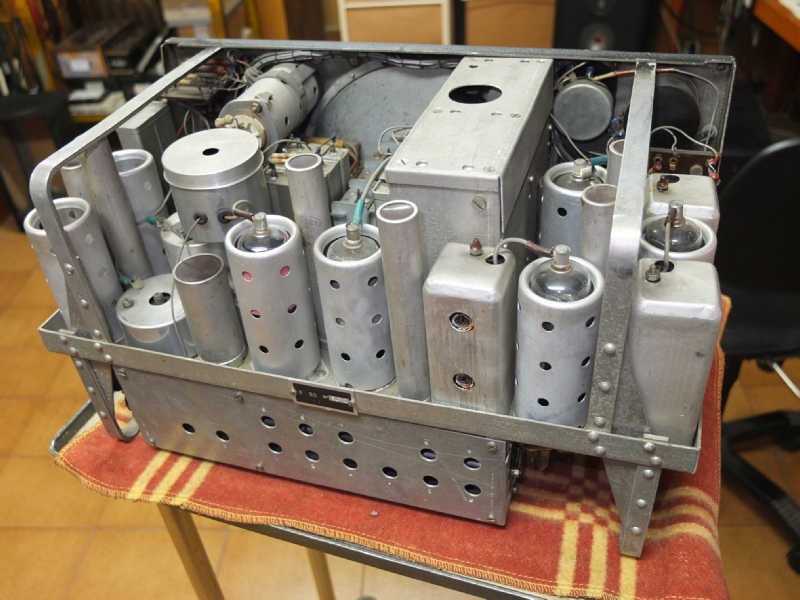 Antonio provided several excellent internal photographs of his Spanish-made AD.8882B. Ignoring the obvious absence of the 3 DF circuitry valves, there are some instantly obvious differences in the build. Note how the I.F. cans are not cylindrical but rectangular, the valve cans are different and the tubular capacitors appear to be tubes capped off with epoxy. 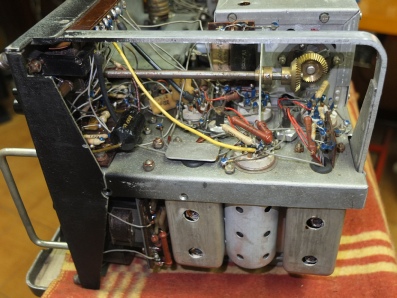 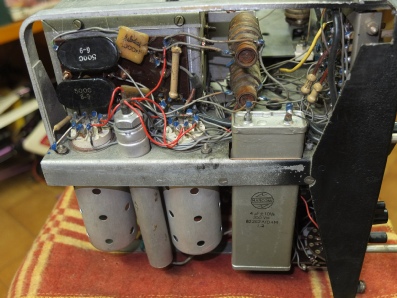 Here are two more photographs showing some more differences. Note how the valve bases appear to be ceramic and that two of the capacitors, the 4uF block and the tubular capacitor actually extend below the chassis. It is also clear that the Spanish alternative to the Jones Connector is ‘slimmer’ and takes up less under-chassis space.

Thanks again to Antonio EA3AGZ for these fascinating photographs.
EA3AGZ
« previous
next »