Wow! Where did June, July and August go? It is now September and absolutely nothing on the microwave front this year! (so far); but plenty of non-radio related stuff to keep me occupied to the extent that I have had almost no time to play with the radios anyway.

However ...
Following on from the unfortunate experiment with the Lucent PA, it was logical that I consolidate my existing 23cm setup. About a year ago I noticed that the DC input to the 23cm PA was well down, indicating the output was down also. A ‘quick finger on the PA module’ test clearly indicated that one of the ‘bricks’ was NOT developing power. The PA in question was one that I had inherited, not having built it myself. I more or less stripped the board and rebuilt it from scratch to no avail. The power was still down, and the same M57762 PA module was cool. I checked and re-checked the Sage Wire-line couplers but found nothing amiss. The Mitsubishi M57762 is an obsolete part these days, but Grant at GH Engineering was able to supply me with one.

With the replacement module fitted, the power looked good and both ‘bricks’ were warm after some ‘key down’, which was a relief. But it was not long before the same low power problem came back. This appeared to be an earthing, or grounding issue with the power modules. So I fitted copper earthing straps (to both modules), as seen in the photograph below, and the output power was restored.

M57762 with copper earthing straps
At the start of 2008 (going back a bit here) I was conscious that something was not right with my M-Squared yagi on 23cm. The first indication that something was amiss was when GB3EDN dropped dramatically in signal strength. And then a pattern emerged. It turned out that the VSWR was being dramatically influenced by moisture. On a really wet day, the VSWR could be as high as 3:1. Along the way, I had replaced the mechanical coax relay with an experimental solid state switch using PIN diodes ... See below. 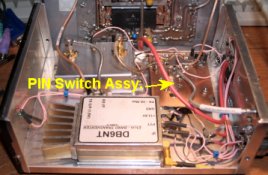 
Although the PIN switch worked, it probably didn’t cope too well with high VSWR at the antenna port. I say this because soon after, the output power dropped again; and tests revealed that one of the PA modules was, as before, not developing power ... NUTS! Fortunately, I hadn’t thrown out the previously suspect M57762 and found it to be fully working! Was it really just an earthing issue all the time? I had built a single PA PCB and my decision was to just run with a single PA module until something bigger came on the horizon. However, when I removed the dual-module PA from the heatsink, the output load-balancing resistor fell off! I have to conclude that this resistor must have been the culprit all along. If the resistor was ‘open-circuit’, then the output power combiner would not function to the effect that the module connected to the other end of the same wire in the Sage Wire-line coupler would simply not develop power! 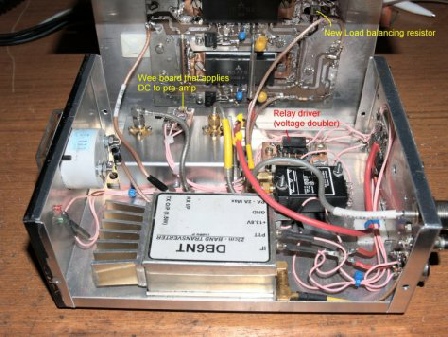 GH Engineering came to the rescue again with a new and albeit larger 50 ohm stripline resistor. Needless to say, the PCB had to be modified. At the same time I took the opportunity to replace the PIN-Switch board with an Sivers SMA coax relay. The photograph on the left shows the final layout. Since the PIN-Switch board was also responsible for applying DC to the pre-amp, I had to make a small PCB to take on this task, and a simple voltage doubler was required to drive the 28V coil in the relay. Everything works well now, and my confidence in the system is restored. The M-Squared antenna was replaced with a 35 ele Tonna kindly donated by Alan GM0USI ... And I still have a spare M57762!

An autopsy on the M-Squared yagi revealed that the supposedly water-tight dipole-centre was full of water!