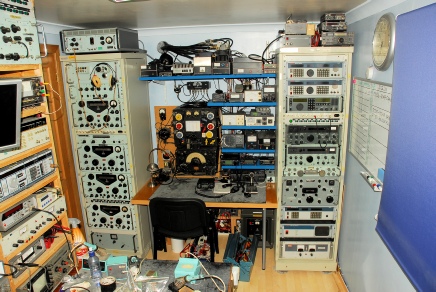 I will now try to do a round-up of 2018 on a single page! As you can see, both my 19” racks are now full, with the left one overflowing into a 4U cabinet on top! The problematic ProSisTel rotator has been replaced with a Yaesu G1000DXC. Such has been the demand this year for my restoration and refurbishment services that I still haven’t written new software to control my WJ-8712. Nor have I found the time to find out what is wrong with my 13cm yagi which exhibited a problem immediately after moving the shack and thus extending the feeder a year ago! I did manage to resurrect the RA98 (in the 4U rack). The 18KHz oscillator had failed. Actually the glass envelope is largely missing, thus the dual quartz element is exposed to the atmosphere and this may be partly to blame. However I found recently that reducing the value of the anode resistor (normally 1M-ohm) to 470K gave the circuit a bit of a ‘kick’ and the RA98 is now running very nicely! Back in May I was VERY fortunate to pick up a car-load of Racal 3700-series kit, comprising Receivers, Drive Units, Linear Amplifiers, and Power Combiners. I also inherited a Collins R-390 and invested in an SDR-Play RSP1A.