So often we are told that old-fashioned tungsten light-bulbs are a source of pollution and should all be replaced with modern low-energy equivalents. The so-called energy-efficient light-bulbs that were originally in the room which became my new workshop were a joke; they took so long to reach full brightness that more often than not it was simply not worth switching the lights on! So when the room became my new workshop, I decided to go for a light source that was instant … LEDs! I discussed this approach with a friend who warned me that the switch-mode driver PSUs for such things can often be a source of RF interference (QRM) and that I should consider building a linear PSU for the job. I decided to use 600mm by 600mm illuminated ceiling panels which are designed to replace standard suspended-ceiling panels. I initially planned on fitting four of these above key areas in my workshop but having witnessed the amazing level of near daylight that they produced, I opted to just fit three. The level of light was fantastic, but my friend was correct. The noise level from just one of the small SMPS LED drivers was unbelievable … filling the RF spectrum from 1MHz all the way up to 500MHz. Such was the level of QRM that all but the strongest of signals were completely wiped out.

So here’s a thought. Are we simply swapping one form of pollution for another? OK, LED lights are more efficient and theoretically result in less greenhouse-gas production, but often the circuitry necessary to power them generates so much RF interference that radio reception in the vicinity is totally wiped out. Have you ever been sitting at traffic lights in your car, listening to the radio when a bus pulls up next to you and suddenly all you hear from the radio is ‘static’? That’s LED lighting on the bus doing that! Personally I don’t think that the policy makers are aware of this … and even if they are aware, I don’t think they would care. They’re more interested in the pat on the back they get for their part in reducing our carbon footprint. If manufacturers were conscientious enough to build the appropriate suppression circuitry into their LED drivers we wouldn’t have this problem. However, such quality comes at a price … a price that we don’t want to pay. The far-eastern manufacturers know this, so they either leave the components off the board or leave them out of the design altogether! If you don’t think this is a serious issue, watch this video. 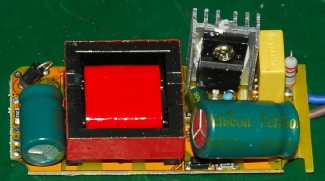 I’ve seen many SMPS LED PSUs that are between 12V and 18V. However these ones generate a nominal 60V. This may at first appear a tad excessive until you take into account the size of the panel: 600mm x 600mm. I would think that such a panel contains around 100 LEDs.
At first I attempted to reduce the QRM by clipping ferrite cores onto the input and output leads. This only had the effect of shifting the concentration of QRM!


Here is a photograph of the offending SMPS … a minimalist approach when it comes to design … absolutely NO attempt to reduce RF emissions. I think the 3-terminal semiconductor on the heat-sink is a transistor but the markings on it differ from board to board, so I have no idea what it is.
The marking on the PSU enclosure states that the current rating is 600mA, which I confirmed as the maximum current that each panel draws on switch-on … dropping to around 550mA after a few seconds.
« previous
next »