I was given an Ionica 15W 9cm PA some time ago. However, I had always considered 9cm a band where nothing short of a dish would suffice for an antenna and since I prefer to operate from home I had never considered operating higher than 2.3GHz. That was until I was handed a redundant Ionica ‘Domestic Unit’ ... The little brown box that was often bolted to the house. This gave me an idea. Not that the electronics were of much use ... but the 6-patch planar array got me thinking ... Could I build a complete transverter, using my 15W PA into this little box and mount it on my mast and use the internal planar array rather than a dish? 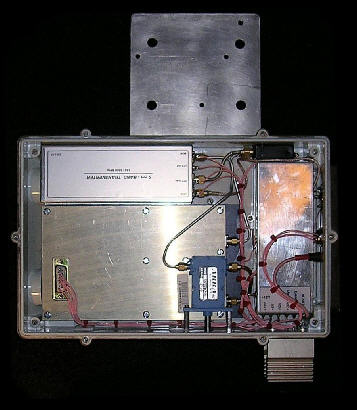 The answer was off course, yes! Initial ideas of building the actual transverter from scratch were quickly dismissed when it became apparent that DB6NT’s MK2 9cm transverter kit was affordable. If there is one disadvantage with the Ionica 15W PA, it has to be the power supply requirement . . . requiring +12V, -12V, +5V and +10V. Then add to that, +28V for the aerial change-over relay. Inspired by G3PHO’s 9cm transverter, the tin-plate box on the right provides all these voltages and also contains the DB6NT ‘style’ sequencer. All switching is effected by high current MOSFETs to minimise IR losses, and everything is mounted on a single PCB with the 10V regulator being mounted on the outside of the case. I used a TO-3 can device with an isolated can . . . A case of using what was at hand!

Obviously the case was not intended to house the PA, so a fair bit of plastic was cut away to make way for the hefty heat-sink with almost half of the back of the box being cut out. The heavy aluminium mounting plate also helps to support the heat-sink. The output of the DB6NT transverter is in excess of 200mW, much greater than the 0.8mW normally required to drive the PA to 15W, hence the ARRA attenuator. This is a 30dB unit which although only specified for 2-2.4GHz, tests showed it worked just fine at 3.4GHz. 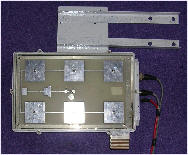 The original box was chocolate brown in colour (lovely!). I re-sprayed the front of the box gloss-white along with the heat-sink (to reflect heat from the sun!). The rest of the box and metal-work was then weather-proofed with white Hammerite paint. An aluminium covering was fashioned to protect the connectors from the elements. My initial plan was to mount this remote transverter on my main mast since there is a spare run of LDF4-50 already in place. However, at just over 4Kg in weight I felt this was too heavy. Not that the mast would not be able to support it . . . It probably could, but when the mast is tilted over, the extra 4Kg would manifest itself as a massive force due to the lever effect. 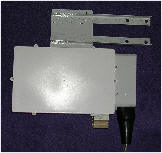 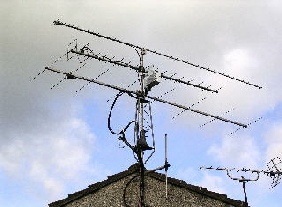 So it is mounted on the smaller mast on the end of the house instead. A major benefit of this is the smaller cable run resulting in much less IR drop in the power line. Does it work? Off course it works! We just need some propagation over the North Sea now!