After a break of thirty years ...

9 minute read
This post is part of the series 'Portraits':

Back in 1975, I think, I was told by an art teacher at the school that I attended, that I couldn't draw. This was in response to my lack on interest in drawing drift-wood and carburettors!

I remember the one-way conversation as if it were yesterday. Having found myself with an abundance of 'free periods', I had opted to have a go at 'O-Level' Art. I had always drawn ... mostly aeroplanes and tanks. If I wasn't making Airfix kits of planes, I was drawing them. So when asked to pick an item ... any item on the table, around which we sat, I suffered a 'brain-freeze'. I remember the SU-carburettor and a lump of drift-wood. There might even have been some enamel kitchen-ware in there, but none of it succeeded in grabbing my attention. I can't even remember what I ended up drawing!

What I do remember is the teacher taking my 'attempt', looking at it, then saying "Well I think we have to agree that you can't draw". This was the same teacher who had confiscated a sketch that I had done a couple of years previous.

Whilst in 3rd year at high-school, three of us had found ourselves with two free double-periods per week. So we managed to find a sympathetic art teacher to amuse us for these four periods. I spent a lot of time drawing battle scenes whilst my two friends flirted with the young female art teacher, who was subsequently nick-named 'squeezable'. Curiously it was never actually said why the name came about ... it just seemed appropriate at the time. On one occasion, one of the others, not me, declared it to be national carrot week ... So Squeezable allowed us to hang a real carrot from the ceiling. Not having the heart to remove it, she let it hang there for several weeks. It would be fair to say that the three of us were probably more interested in the young female art teacher who had kindly volunteered to be our child-minder than we were in achieving anything in art.

So what about the confiscated sketch? It must have been during the run-up to Christmas and the concept of an alternative to the traditional Santa Claus was put to us. And so it was that Super Santa was born ... or not. Each of these double periods was over lunch and I had spent the pre-lunch session honing the upper-body muscles in my interpretation of Super Santa and had just drawn his right leg and was half-way down the left leg when the bell for lunch rang. So in a moment of whimsy, I quickly finished it off with a pirate-style wooden stump ... and headed off for lunch.

On returning to the class-room on the 6th floor (those of you familiar with North East Edinburgh will recognise this) my artwork was nowhere to be found. Squeezable explained that one of the other teachers had seen it and taken it away to show all the other art teachers. He had apparently said it was the perfect way to destroy a young child's image of Santa. I was rather proud of that.

Fast forwarding now to 1979 ... and I found myself watching a program on television where the focus was on art. The subject may have been realism since at one point, one of Gustave Courbet's landscapes was shown, highlighting the level of detail that he put into his work. This was the event that inspired me to prove that art teacher wrong. Since I found faces fascinating, at that moment, I determined to draw people. Basically, I set myself a challenge.

I think my first portrait was taken from a Donna Summer album cover. I think it was done entirely with 2B pencil and as a result it lacked depth and texture. But the desired likeness was definitely there. I was greatly encouraged. The colour supplement that accompanied the Observer newspaper provided occasional subject matter and on recommendation from my sister who was doing art at school, I invested in a range of pencils and something called a Putty Rubber. And I began to get quite good ... so I thought. 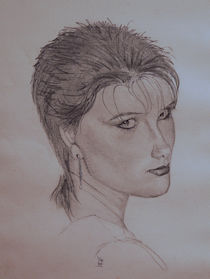 There is something very satisfying about achieving that definitive 'likeness'. Sometimes its in the eyes. But it could just as easily be the nose, the mouth or the jaw-line. Sometimes you don't even have to 'finish' the sketch for people to instantly recognise who it is. On one or two occasions I have looked at what some might consider unfinished work and thought "I think I'll stop there".
From 1979 through to 1984 I turned out quite a few portraits of friends, 'heros' and family members. The sizes varied from A4 right up to A2. Almost all were done from photographs, where one or two were based on passport-size photographs.

Left: I always found hair problematic so I frequently applied a stylised approach as in this portrait of an aquaintance from 1984.

The last portrait that I did, a compound family group of my wife and her three brothers, was back in 1991. Since then my art bin has been closed and my putty rubber has literally turned to stone! If you were to ask me why I stopped drawing portraits, I would be hard-pressed to come up with an excuse. What I can say is that the longer you stay away from drawing, the more daunting the 'return' appears ... and maybe that is why it has been almost thirty years since I last produced a portrait.

However, as of September 2020, I'm back! In the interim, my wife has, over the last few years been exploring the territory of mixed-media art, particularly textile art. It isn't that she hasn't attempted to get me back into drawing. I've just been particularly good at deflecting her frequent suggestions ... until recently that is, when the mention of my portrait work came up during a telephone conversation with a friend and I was subsequently challenged to produce a portrait of said friend!

What follows is a selection of my portraits from 1980 to September 2020. Unfortunately quite a few of my 'early' pieces have suffered damage. Some have clearly been rolled up at some point (shame on me!) whilst others appear to have suffered from moisture damage. However I think they are still worth showing. 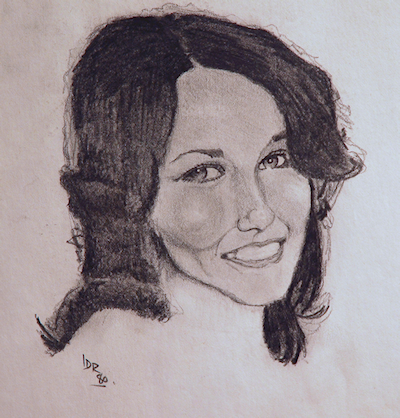 Page three favourite and latterly of Emmerdale, Linda Lusardi. From the looks of the way I did the hair, from early 1980. 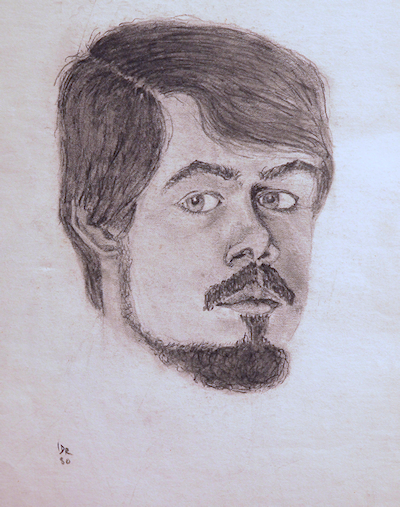 For some reason I attempted a self-portrait. So here's me, age 22 ... back in the day when my hair was NOT grey and the moustache stubbornly refused to link up with the beard. Working from a mirror is somewhat disconcerting ... AND the result is obviously reversed. 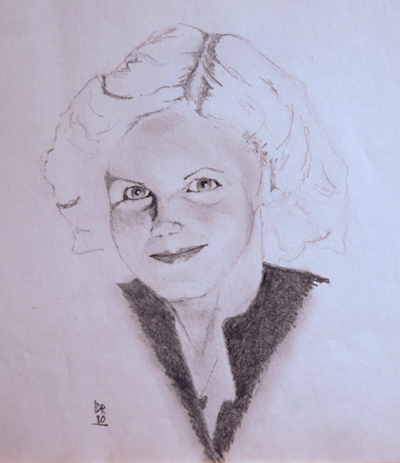 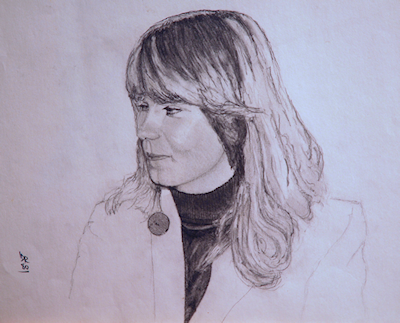 Above and left: Glynnis and Audrey, two friends from 1980. 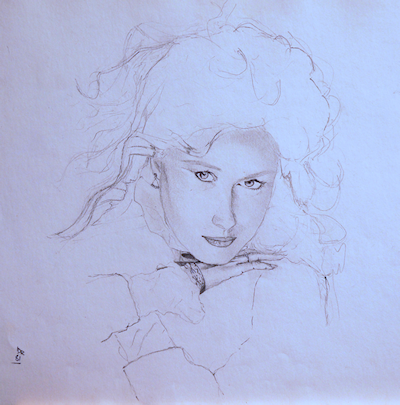 Pretty certain this is Jane Seymour ... from a Sunday colour supplement. 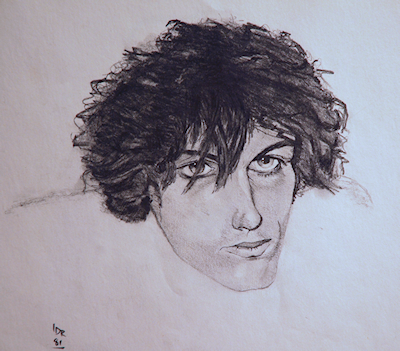 'The Floyd':
Above: The 'Crazy Diamond', totured genius, Roger Keith "Sid" Barrett
and right: Dave Gilmour, who apparently taught Sid to play guitar and ultimately replaced him in 1968. 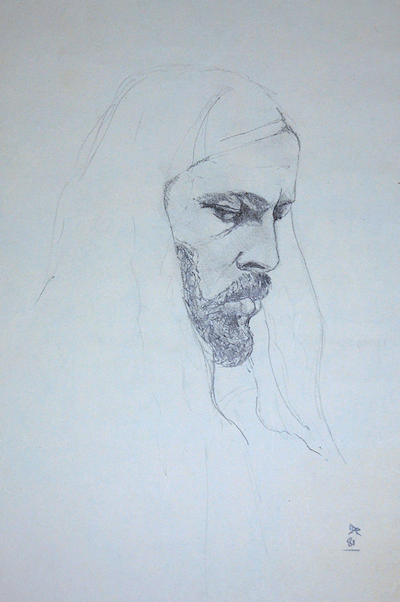 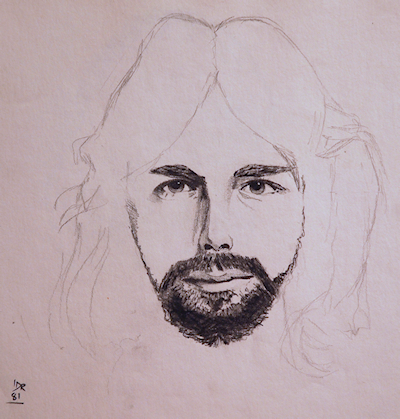 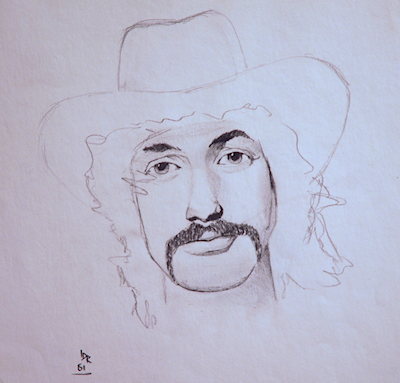 Nick Mason ... One of those (I think I'll stop right here) days. 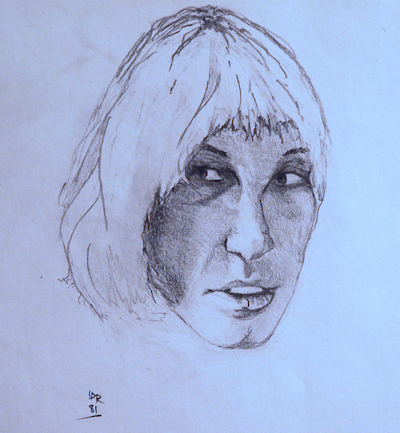 Roger Waters ... Back in the day, pre-internet, it was very difficult to find a shot of Waters when he wasn't in shadow. 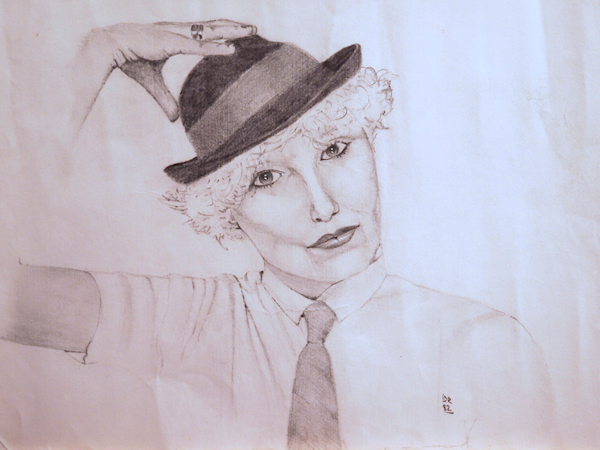 Sandy modelling a hat ... from a passport-size photograph. 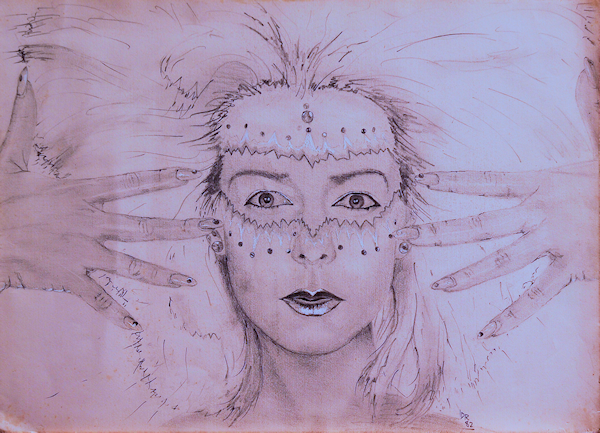 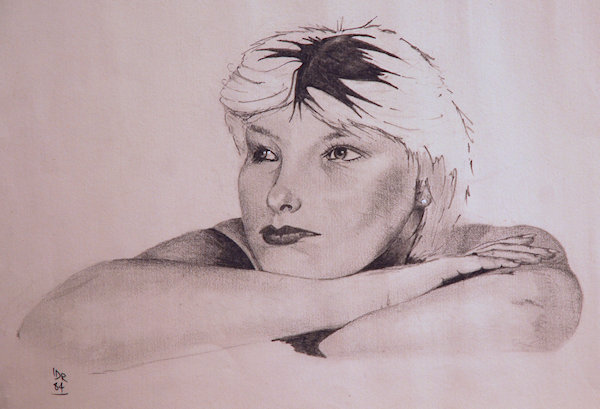 Another portrait of my friend Sandy. 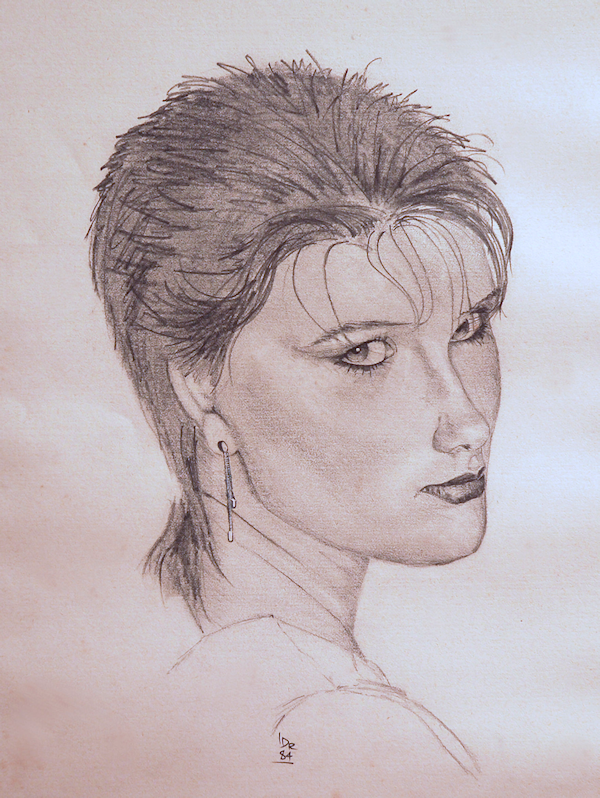 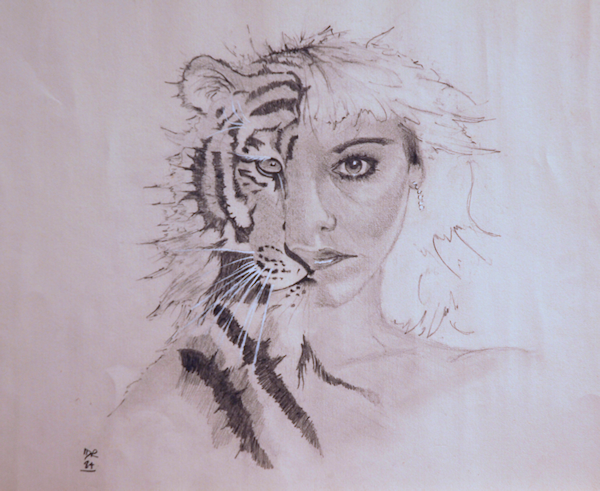 Purely experimental. And, it actually works! 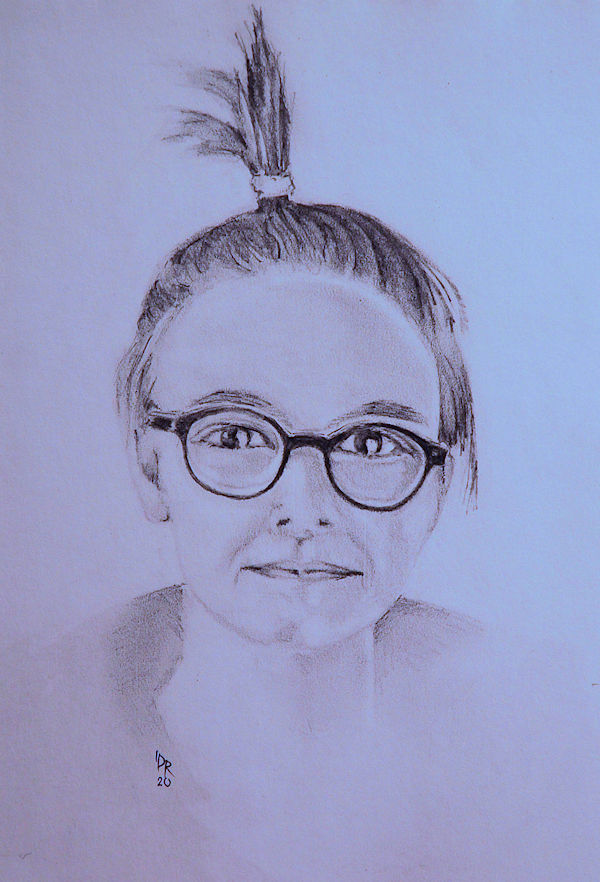 My friend Cassie, about to have her hair cut off ... all of it!

Cassie refers to me as her adopted Grandad. It was during a telephone conversation back in August that Ruth, my wife just happened to mention that I used to do portraits. Cassie had not been aware of this and was most surprised. It was Cassie who challenged me to pick up the pencil again.

Having invested in new pencils, putty rubber and a band new A3 pad, I sat down with a photograph of Cassie about to lose her hair up on my PC monitor. Having prepared the page by 'washing' it with a 6B pencil, I tentatively began to draw. My hand was shaking. This was the first time in twenty-nine years that I had put pencil to paper in this way. Could I remember how to draw? The end-result took three and a half hours. I'm both surprised and pleased with the result and have to concede that my style when it comes to hair has aparently changed. 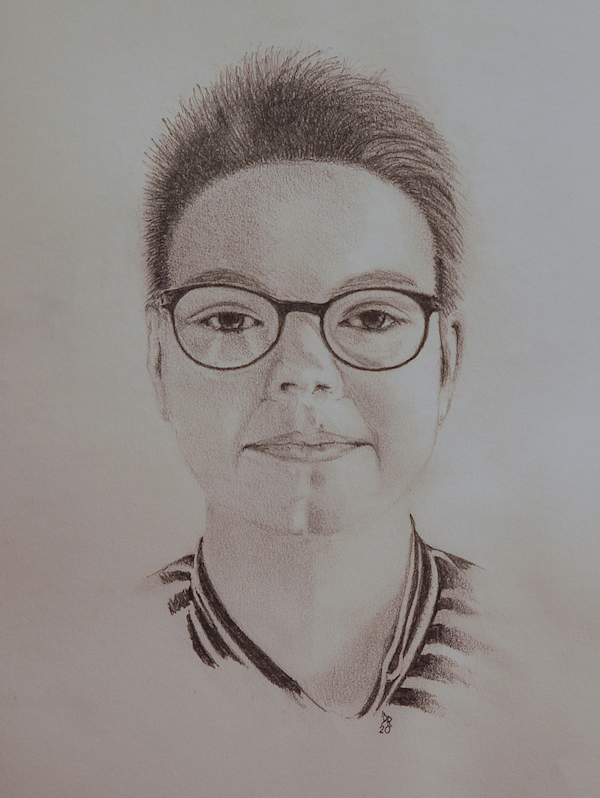 
I then decided it was time to try something new ... 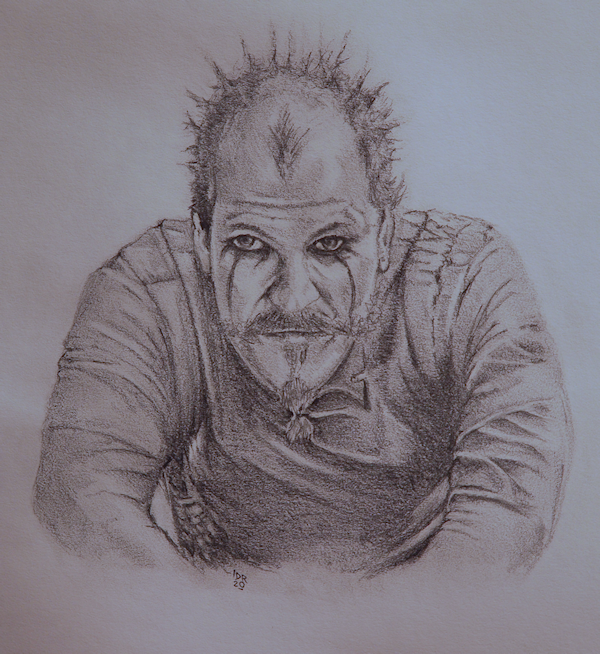 From Vikings: Gustaf Skarsgard as Floki. 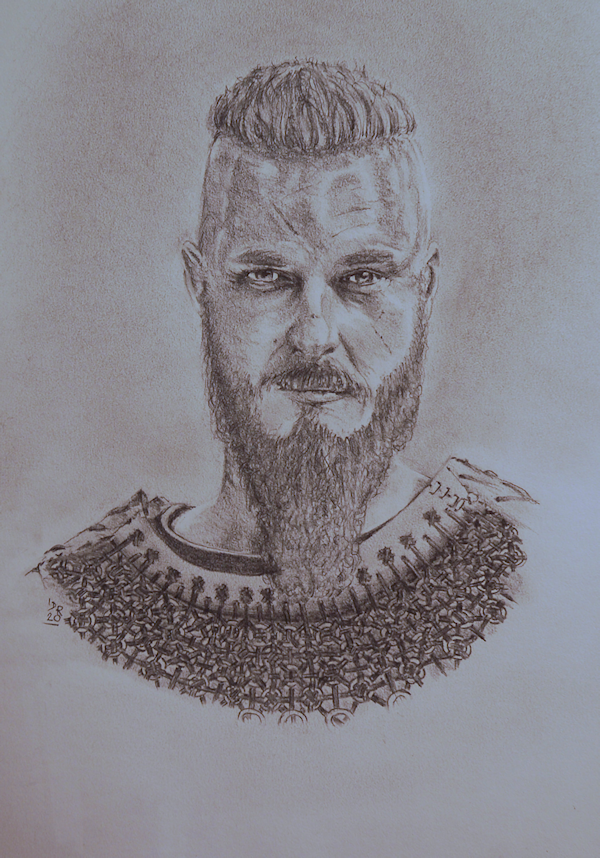 ... and Travis Fimmel as Ragnar Lothbrok. 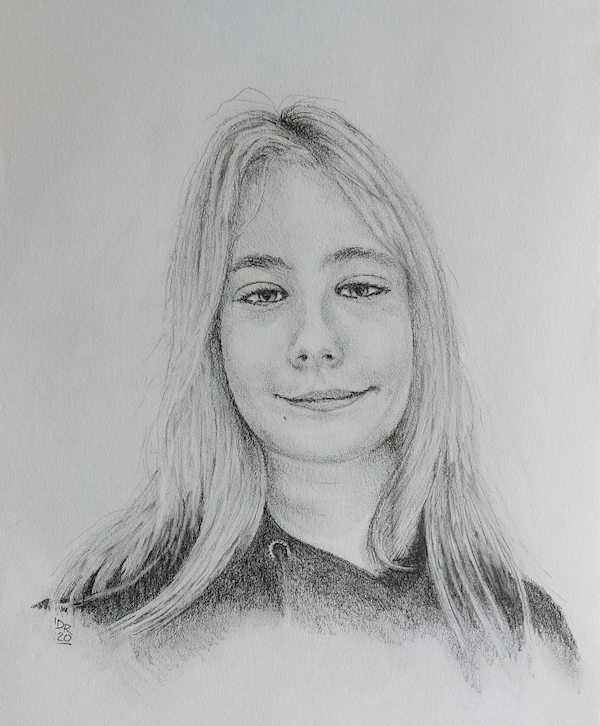 Cassie's sister asked if I would do one of her. This one's for you Anya! 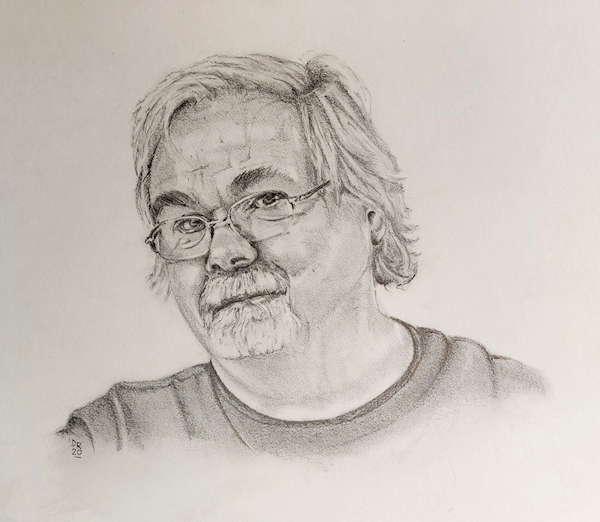 Next post in the series: Three more portraits ...
portrait, art, sketches
« previous
next »